SO SAD, SCHOOL GIRL WHO DIED IN THE FLOOD

THE body of 13-year-old Brittanie Cohen, who was swept away by raging floodwaters in St Thomas on Tuesday night, was found wrapped around a tree along the Golden Grove main road yesterday.

Brittanie, a seventh-grade student of Paul Bogle High School, and two of her peers were trapped by floodwaters as they made their way home from school, during heavy rains induced by a trough that has been lashing the eastern section of the island since early Tuesday — badly damaging roads and homes.

The bus that was transporting the students from Golden Grove to Dalvey, where Brittanie lived, had to abort the trip because of rising floodwaters, residents alleged.

Residents told the Jamaica Observer that Brittanie and two of her peers attempted to make the journey home by foot, when she attempted to cross the flooded road at Hampton Court, and was swept away. The other two girls were rescued by residents, but efforts to find Brittanie failed as night had fallen and there was no electricity in the area.

Yesterday, one resident said Brittanie appeared to have sought refuge on a tree as the water rose, her head found stuck between its branches less than a quarter of a mile from where she was swept away.
Her mother, Jullian Green, was beside herself with grief yesterday. She said she spoke to Brittanie — the first of her three children — minutes before the tragedy.

“Mi deh yah and a wonder weh she deh, so mi call and she seh she deh a Hampton. Ina di five o’clock bells mi a wonder how she ago reach, so mi get up and say mi a guh look fi mi daughter,” she told the Observer.

“One man come to mi and seh she last (got lost) ennuh. Everbody a tell mi di same ting seh dem cyaan find her. Mi nuh know what happen after,” Green said, noting that Brittanie was a quiet and responsible child and would have normally reached home by 4:00 pm. 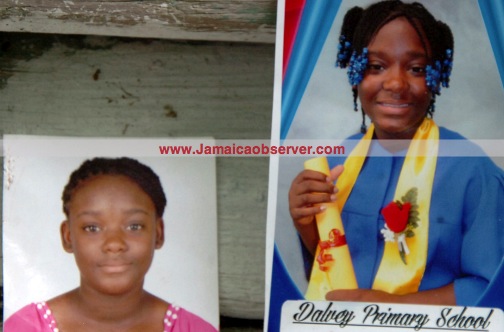 As if the tragedy was not enough, Green and her spouse spent most of yesterday sweeping mud from their house.

“The bed wet up, everything wet up,” she said.

Yesterday, scenes of residents trying to clean mud from flooded homes were replicated across St Thomas. Several roads were dug up by floodwaters and others blocked by landslides, while some areas were still without electricity as a result of uprooted posts and displaced wires caused by fallen trees.

The Jamaica Public Service said that a total of 6,600 customers were left without power — the majority of them in St Thomas — as a result of the rains. That figure was reduced to to 3,899 by yesterday afternoon.

Stephen Shaw, the NWA’s manager of communication and customer service, said that while assessment of the damage was still being being done, their main focus was clearing the roadways.

“In terms of damage assessment, the process continues. I’m trying to see if we can clean some of those roads that have been impacted by fallen trees, landslides, and downed power lines, among other things,” Shaw told the Observer.

He said the areas mostly affected in the parish were between Morant Bay and Bowden.

“We have issues with Morant Bay; there was significant flooding yesterday (Tuesday). The courthouse was flooded out, and as we speak, we’re actually trying to correct the situation or to significantly mitigate, at a minimum, what happened at the courthouse yesterday,” he said, referring to the suspension of the hearing of cases after the building was flooded out.

He said there were also reports of blocked roads in neighbouring Portland, including the areas of Folly and Fair Prospect, but that he received no report for St Mary.

Meanwhile, the Met Office in its late evening bulletin yesterday downgraded a flash flood warning for the three eastern parishes to a flash flood watch, noting that “satellite imagery indicates that the main area of rainfall activity has shifted south of Jamaica”.

But the Office of Disaster Preparedness and Emergency Management urged residents in low-lying areas to continue to be on the alert for flooding, as the trough continues to produce unstable weather conditions as it moves across the island.

The disaster agency aid that it had received reports of flooding and landslides in the parishes of St Thomas and Portland. It said reports from St Thomas indicate that flooding occurred in the communities of Morant Bay, Golden Grove, Hampton Court, Hardely Crossing, and Cheswick, causing roads to become impassable.

The agency added that a report from Portland also indicated that intermittent showers and strong winds accounted for flooding and damage to houses, agricultural crops and blocked roadways due to fallen trees.

7 thoughts on “SO SAD, SCHOOL GIRL WHO DIED IN THE FLOOD”