Hundreds of persons have started to establish an informal community on lands believed to be owned by the State just outside the relatively new Old Harbour Glades in St Catherine, leaving persons who paid millions of dollars for the upscale houses worried that a squatter settlement is developing just outside their back doors.

The land is covered by thick vegetation and is extremely rocky in certain parts, but this has not prevented a steady stream of persons from descending on the area almost daily seeking to grab their parcel. 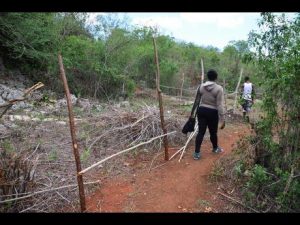 The squatters have taken steps to get themselves organised with at least two meetings having already been held, the most recent taking place last Wednesday.

Among the issues discussed at the last meeting was the pooling of money by the squatters to construct a road and the laying of water pipes. A third meeting is scheduled for today.

“Close to 300 people come in already and clearing out, and by weekend it supposed to reach 500,” said one man seen hanging out at the entrance of the property beside a makeshift stall where refreshment was being sold to visitors.

“You have a mixture of people, both from surrounding communities and outside, such as Spanish Town, and even country people coming,” declared the man who asked not to be named.

During a visit to the area last week, members of our news team saw several persons venturing deep into the hilly region aiming to identify a plot of land that has not yet been claimed.

Several areas were seen where shrubs had been cut down or burnt. In some areas, fences were erected while one man was seen putting up posts, which he said was for a man who had claimed that piece of land.

The man identified himself as Roy and said he had been living in a board structure on the property for a number of years.

Roy has taken on the job of pointing out to new squatters what constitutes a plot, where has been claimed and where they could call their own, while charging between $3,000 and $5,000 to those who need their captured plots cleared.

He could not say who has given the squatters permission to claim the land, and that is a question which Audley Campbell, the councillor for the Old Harbour North division, is trying to get an answer to.

“I am trying to get to the bottom of it, because it is going to devalue the community (Old Harbour Glades), which is a lovely one right there,” said Campbell.

“I am very much concerned, as it is going to be a security hazard for the area. That area can’t be policed like that, and second, it will be a health hazard, because there is no sewage arrangement or nothing up there,” added Campbell.

Karen Stewart, who was seen walking through the bushes, said the hope is that after they settle on the land, the Government will come in give them an opportunity to formalise their occupancy.

“I heard about it and I born and grow around the road so I came to look my piece. I have identified a little piece that I tek,” said Stewart.

“So to how I look at it right now, if I take a little piece and build a little shed on it and anything happen they can take their thing. But it is not private and a Government own, when Government comes in we will have a chance because we already live on it.”

But police constable Garfield Edwards, who lives in Old Harbour Glades, said the residents of the almost new scheme do not want the squatters on their doorsteps.

“Some of them started building up houses, but we made them tear them down and told them that if we came back up there and saw them we were going to arrest and prosecute them,” said Edwards.

“We also told them the proper channels to go through, because if they get the OK and come back with documents that show they got permission to build on the land that’s fine.”

Fellow resident Mark Day is concerned about the crime that the squatters might bring to the area, with an increase in break-ins having already been noticed.

He is calling on the authorities to step in before permanent structures are erected.

“If the squatting go on it is going to be like is a ghetto we live in, and that’s what we are running from,” said Day.

According to Campbell, he had informed the St Catherine Parish Council about what was happening, but nothing had yet been done.

But when contacted, AndrÈ Griffiths, planning officer for the St Catherine Parish Council, said he was not aware of the development before being informed by The Sunday Gleaner and would be deploying a team to look into it.

“It is something that we are not going to leave unattended, because we have to deal with building approvals, and anything that has not received approval we will do the necessary serving of notices and ask for it to cease immediately,” said Griffiths.

Just over five months ago, The Gleaner uncovered a similar land grab in the Dallas Mountain area of St Andrew.

At that time, persons claimed they were sold the state lands, but the Government indicated that it had not entered any agreement for the sale of the lands and the police launched an investigation into the transaction.

7 thoughts on “SQUATTERS TEK UP RESIDENCE BESIDE OLD HARBOR GLADES”