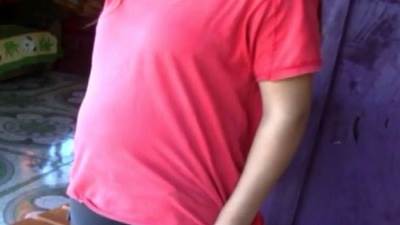 The man who allegedly sexually abused and impregnated his 10-year-old stepdaughter, sparking a debate on abortion in Paraguay, was arrested Saturday after 15 days on the run, police said.

Gilberto Benitez, 42, insisted he was innocent and set-up by his girlfriend, the stepdaughter’s mother. He faces 15 years in prison if convicted of rape.

“I will do any (paternity) test to show it wasn’t me,” he said, adding: “I’ve been with tons of women, and I never got anybody pregnant.”

The rape and impregnation of the 10-year-old girl prompted a heated abortion discussion in both houses of the country’s Congress.

Abortion is a criminal offense in Paraguay, a conservative mostly Roman Catholic country, except in cases when the mother’s life is in danger.

Humanitarian groups say the girl’s 75-pound (34 kilo) body cannot support her pregnancy, now at five months, and her life is in danger.

The government, courts, the Catholic Church and other groups have insisted that her pregnancy not be terminated, partly due to its advanced stage.

“The pregnancy will not be interrupted,” Health Minister Antonio Barrios has said. “We’ve already completely ruled out abortion.”

The girl’s pregnancy was not discovered until April 21 when her mother brought her to a public health clinic believing she had a tumor. The mother is now under arrest by authorities who believe she enabled her daughter’s abuse.

The girl is under medical care in a special ward for pregnant adolescents at a Red Cross Hospital.