STOP PUTTING MOUTH ON ME 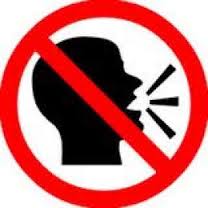 “Stop putting mouth on me”

The word voice is defined as the sound or sounds uttered through the mouth of living creatures, especially of human beings in speaking, shouting, singing, etc.

Now even though our dictionaries give us an understanding of the word voice as being an utterance or sound recognized audibly via our hearing. However, to the contrary it is my intent to provide you with not only biblical proof but also biblical insight of voices that are being uttered consistently that we cannot hear physically but nevertheless they are very much real and impacting; to the extent our lives are being influenced and shaped by them.

If someone were to place you in a sound proof room with absolutely no noise, where the silence became almost deafening, I am certain you’ll conclude that there were no sounds or voices in that room. But what if I were to tell you that there were voices in that room but naturally you could not hear them but in any event they were speaking to you and influencing you to do many of the things that you would naturally do?

During, many of my teaching engagements I would demonstrate the above point by asking everyone in the room to remain silent. Then I would ask, “Do you hear any voices?” Of course the usual response would be, no! Then I would advise them to continue their silence, while I in turn would produce a radio, turn it on and the voices would sound from the radio. The reality is the voices that the radio was generating were not originated from the radio itself. Instead the radio was just a device used in retrieving the many “silent voices” that surrounds us daily that cannot be heard but these voices are second by second influencing our behavior, decisions and patterns of the way we live.

Thus, bringing me to today’s teaching entitled “Stop putting mouth on me”. The above topic is considered a local colloquial or slang, which simply means to stop speaking bad things over one’s life that will eventually have an adverse outcome on that person’s life. Although simple in meaning, this colloquial is by far the most successful tool in changing the course of a person’s God intended destiny.

The revelations that we are about to embark upon today concerning this topic will force you to really consider the words that leave our mouths. Nevertheless, due to its effectiveness, Satan uses it to his advantage by influencing leaders to foolishly or intentionally change the course of the lives that are entrusted to them. The first revelation that we will unearth is found in Genesis 4, where Cain killed his brother Able. In verses 9-10 God asked Cain, where was his brother Able, which Cain replied, “Am I my brother’s keeper?” God then asked Cain, “What has thou done? The voice of thy brother’s blood crieth unto me from the ground”. Now let’s review this scripture carefully, Able is dead at this point, so how is it that even after his death he still has a voice in the earth?

Let us look at another biblical account of this mystery. In Genesis 9 it is recorded that after the flood in the days of Noah, Noah got drunk and was naked in his tent. It is further recorded that Noah’s son Ham saw the nakedness of his Father and told his brothers. The other brothers took a piece of garment walked backward into their Father’s tent and covered him. When Noah awoke from his wine and discovered what his son had done, verses 25 of Genesis 9 said that Noah cursed his grandson Canaan, who was Ham’s son. Interestingly enough, even after Noah’s death, Canaan who was the patriarch or the Hittites, Girgashites, Amorites, Canaanites, Perizzites, Hivites, and Jebusites that all once ruled the Promised Land, eventually became servants to the decedents of Ham’s brothers just like Noah said when he cursed Canaan their great grandfather. Question! How is it that Noah who had been dead and gone, his voice still rules and influences the decedents of Canaan to the extent that his words has made them slaves to another?

In Genesis 49:1-4, scripture records how Jacob was about to die, he summons his sons together to tell them what would take place in their future. He began by speaking over the life of his first son Ruben. The following is what he had to say, “Reuben, you are my firstborn, my strength, the child of my vigorous youth. You are first in rank and first in power”. “Unstable as water, thou shalt not excel; because thou wentest up to thy father’s bed; then defiledst thou it: he went up to my couch”. Question! Why would Ruben’s Father begin blessing his son only to turn around and pronounce a curse on him? If we go back In history according to Genesis 35:22, it is said that Ruben had sex with his Father’s concubine and it was because of this his Father cursed his destiny.

Here is where it becomes interesting; in all biblical accounts the revelation here is that, the words of a leader influences whomever those words are spoken in favor of or against. Secondly, in order for those words to be broken it must be done by one of a higher authority. As proof of this in Genesis 33 when Moses began to bless the children of Israel, Moses realized the curse upon Ruben’s life and literally broke the power of those words spoken by his Father Jacob, which placed limitations on his life for so many years. Moses said, “Let Ruben live, and not die, and let not his men be few”. Genesis 33:7

Based on the principles that we’ve unfolded thus far that governs this mystery why not ask yourself the question, who’s words are guaranteeing me failure and defeat? What did your Mother or Father unfailingly said to you that’s silently speaking to you every day and influencing the defeat, depression and limitation in your life?

Statements such as, “you’ll end up in prison just like your no good daddy”, “you’ll never succeed just like your good for nothing mother”, “Nothing good will ever come out of you”, “You’re so stupid, dumb, foolish, retarded, backward etc.”. My friends believe it or not it was these words and many more like them spoken over you by your Father, Mother, Grand Father, Grand Mother, Aunt, Uncle or whoever was in authority over you, THAT WERE LITERALLY RE-ROUTING YOUR GOD INTENDED DESTINY TO A LIFE OF MISERY AND REPETITIOUS GUARANTEED FAILURE! Whether these people are dead or alive their words which are in fact their voices has shackled you and held you hostage to a life of defeat, failure, and limitations.

So many parents are indirectly responsible for their children’s failed marriages, lack of ambition, serving prison time, failed relationships, mental instability and so much more, due to these parents knowingly or unknowingly “putting mouth on their children”. In reality these parents are indirectly responsible for the negative impact on the socioeconomic conditions of any country, how you may ask? well, due to these parents being the primary teachers and care givers speaking evil over their children who eventually became adults governed and influenced by the evil debilitating words Mommy and Daddy said over them.

My friend if this article resonates with you, do not be discourage there is a way to destroy those voices. Like the biblical account of Ruben it took one of higher or greater authority (Moses) to break the curse in order to destroy those voices. Well Jesus Christ is that higher authority, who is willing and able to destroy the years of verbal defeat that has covertly ruled your life. I want to join you in prayer right now asking God to please release you from these evil voices that have held you down and deprived you from a more advanced and fulfilling life.

God we pray that you destroy by fire every demon that has superimposed these evil voices and that the one reading and agreeing with this prayer not only find freedom in you but to be permanently freed from the bondage these voices have caused in the mighty name of your son Jesus Christ. Amen!

Written by: Kevin L A Ewing
[email protected]
kevinlaewing.blogspot.com
Posted by Kevin Ewing at 11:55 AM Links to this post

0 thoughts on “STOP PUTTING MOUTH ON ME”

121 Users Online
Back to top