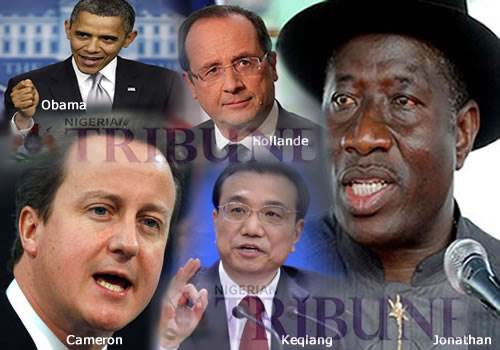 DAYS of terror in Nigeria may be over soon as countries of the orld have joined forces to end the menace of Boko Haram and, as well, help rescue the abducted schoolgirls of Government Secondary School, Chibok, Borno State.

The United States Department of Defence, the Pentagon, has said it is sending no fewer than 10 military troops to Nigeria, as part of the US effort to help find over 230 girls kidnapped by the Islamist extremist group, Boko Haram.

The US government is sending to Nigeria a team of technical experts, including American military and law enforcement personnel skilled in intelligence, investigations, hostage negotiating, information sharing and victim assistance, as well as officials with expertise in other areas.

However, a Pentagon spokesman, Colonel Steve Waren, according to Associated Press, said officials had no plan to launch any military operation now.

Colonel Warren, according to the news agency, said the troops should be arriving in a few days, as part of the larger US assistance team to include State Department and Justice Department personnel.

“The military members will help with communications, logistics and intelligence planning,” he said.

Warren said the US was talking with Nigeria about information and intelligence sharing, but nothing had been decided.

“There are already about 70 military personnel in Nigeria, including 50 regularly assigned to the embassy, and 20 Marines have been there for training,” Warren said.

The British and French governments, also on Wednesday, said they would send teams of experts to complement the US team heading to Nigeria to help with the search for the girls.

Meanwhile, the abduction of hundreds of schoolgirls in Nigeria, is now generating worldwide attention and condemnation.

Muslim leaders in various countries criticised Boko Haram’s leader for using Islamic teachings as his justification for threatening to sell the girls into slavery.

Others focused on what they viewed as a slow response by Nigeria’s government to the crisis.

In an AP report, Egypt’ s Religious Endowments Minister, Mohammed Mohktar Gomaa, was quoted as saying “the actions by Boko Haram are pure terrorism, with no relation to Islam, especially the kidnapping of the girls.”

Also, Sheik Ahmed el-Tayeb of the Cairo-based Al-Azhar, one of Sunni Islam’s most prestigious institutions, said the abductions “completely contradict Islam and its principles of tolerance.”

In another development, a Pakistani English language newspaper, Dawn, published an opinion piece that took Nigeria to task for not moving against Boko Haram.

“The popular upsurge in Nigeria in the wake of the latest unspeakable atrocity provides some scope for hoping that the state will finally act decisively to obliterate the growing menace,” wrote columnist Mahir Ali.

Also in Indonesia, the world’s most populous Muslim-majority country, the Jakarta Post published an editorial on Wednesday, condemning the Boko Haram leader for “wrongly” citing Islamic teaching as his excuse for selling the abducted girls into slavery.

The news medium recalled the Taliban’s shooting of 15-year-old Pakistani girl, Malala Yousafzai, in 2012 because of her outspokenness in defense of girls’ right to an education.

The newspaper also criticised President Jonathan, noting that “only after international condemnation and street demonstrations poured in did President Jonathan tell his nation that he would take all necessary actions to return the young women to their parents and schools.”

In Sweden, in an editorial posted on the left-wing news website politism.se, blogger Nikita Feiz criticised the international community for its slow response and asked why the situation had not triggered as loud a reaction as when Malala was shot in Pakistan.

PRESIDENT Goodluck Jonathan has received the assurances of Great Britain to deploy its intelligence gathering resources in support of Nigeria’s security agencies, currently engaged in the search and rescue operation of the girls abducted by Boko Haram in Government Secondary School, Chibok, Borno State.

In furtherance of efforts by his administration to locate and rescue the girls, the president, on Wednesday, requested and received a commitment from British Prime Minister, David Cameron, who he spoke with on phone from Abuja after meeting with Premier Li Keqiang of China.

The Chinese Premier, on an official visit to Nigeria, had similarly given his country’s commitment to assist in tracking down and rescuing the girls.

Jonathan asked and received a promise of the deployment of British satellite imaging capabilities and other advanced tracking technologies in support of the ongoing effort.

According to the Special Adviser to the President on Media and Publicity, Dr Reuben Abati, who briefed State House corespondents in Abuja, the president thanked Mr Cameron, the British government and people for their concern over the fate of the abducted girls and their willingness to provide concrete assistance to save the girls from the terrorists.

He told the prime minister that the Ministry of Foreign Affairs would liaise with the British government through its High Commission in Nigeria, to work out practical details of the promised support and collaboration against terrorism.

CHINA, on Wednesday, became the latest world power to offer its assistance to tackle the Boko Haram menace in Nigeria, following in the heels of the United States’ decision to deploy men and materials to track down insurgents who abducted the girls on April 14.
President Goodluck Jonathan, on Wednesday, received Chinese Premier, Mr Li Keqiang, who is on a two-day state visit to Nigeria, with both leaders agreeing to cooperate in a number of sectors for the mutual benefit of their countries.

The Chinese Premier is also to participate in the World Economic Forum on Africa taking place in Abuja.

Emerging from bilateral meeting between the two leaders, which took place inside the president’s office in State House, Abuja, Jonathan said the Chinese leader had pledged his country’s assistance to Nigeria in the war against terror.

“The premier expressed firm support to efforts at safeguarding our sovereignty and securing our territorial integrity, as well as promoting economic development

“The Premier promised that China will assist Nigeria in our fight against terror, especially our commitment and efforts to rescue the girls that were taken away from a secondary school in Chibok, Borno State,” Jonathan said.

He said at a joint news conference with his guest that they reviewed the countries, trade, economic, political and cultural relations.

“We have just held bilateral discussions, in the course of which we examined issues of common interest to our countries. We reviewed in particular, our economic, trade, political and cultural relations.

“We are satisfied with the achievements recorded in those fields. We also agreed that the 10th anniversary of the establishment of the strategic partnership between our two countries coming up in 2015 should be marked to further deepen our relations,” Jonathan added.

The President said that he reiterated Nigeria’s commitment to the one-China policy while the Premier expressed firm support for Nigeria’s efforts to safeguard its national sovereignty, security and territorial integrity, as well as promoting economic development.
Pledging to intensify efforts to jointly upgrade strategic cooperation between the two countries, both leaders also agreed to encourage their national companies to further deepen cooperation in infrastructure development, especially railway, power plants and airports.

The two sides considered the signing of the Bilateral Air Services Agreement (BASA) as an opportunity to further deepen cooperation in the field of aviation.