North Charleston, SC (WLTX) – Two suspects have been charged with killing a Good Samaritan who’d stop to help them on the side of the road.

Multiple media outlets report the 17-year-old Deon Frasier and 19-year-old Michael Dupree-Taylor were arrested on murder charges. Frazier also faces a count of possession of a weapon during the commission of a violent crime. 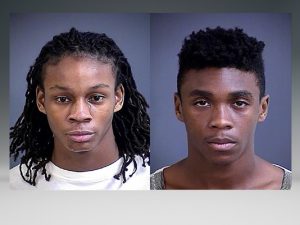 According to North Charleston police, on Monday night the victim had stopped to help pull the two pull a Dodge Durango out of a ditch on North Jimtown Dirve. After the vehcile was pulled out of the ditch, officers say the suspects robbed and shot the man.

Police later arrested the two at an apartment complex.