THE BODIES OF 7 FETUSES FOUND IN ONE WOMAN’S HOME 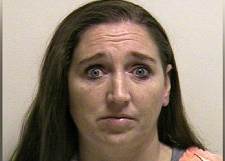 A woman has been arrested on six counts of murder after authorities found the bodies of seven infants packed into separate cardboard boxes at a home in Utah, police said.

Police arrested Megan Huntsman, 39, of Pleasant Grove, on Saturday following a gruesome discovery at a residence formerly occupied by the woman who they say moved out in 2011.

Officers responding to a phone call from a family member who is currently living at the Pleasant Grove residence arrived at the home to find the first baby which “appeared to be a full term,” according to a police statement.

“A family member was cleaning out the garage and came across a box that looked suspicious. Upon opening the box they found the infant inside,” Capt. Michael Roberts of the Pleasant Grove Police Department told ABC News.

Authorities obtained a search warrant to inspect the home, where they found six more infant bodies inside, packaged in separate containers, the police statement said.

Roberts said that through their investigations, they had reason to believe that Huntsman had given birth to the six other babies in the period between 1996 and 2006 and murdered them.

Authorities arrested Huntsman and booked her at the Utah County Jail on six murder counts, but did not comment on why she was not charged with seven counts.

The adult residents of the home claimed to have no knowledge of the dead babies, police said. Roberts could not confirm whether Huntsman had any other children or if she was married.