Hi Met I would like to share a story about one of my family that was groomed n became a ruthless murderer. Let me start myour saying I do not condone murders nor murderers, My family name was DUXIE. Duxie as a child attend church regularly and was brought up with the right way but living in the ghetto he was face with a lot of challenges. He got mix up with wrong crowd who use him to do a lot of evil things. He became a ruthless killer in the garrison. Soon after his name started to spread across the world, he became a contract killer working for the Rat Bat gang. Money started to come in from America England etc. Ratings up after murdering two top dons in Maxfield, these guys in foreign namely Big Carl n Squidly.They loved him cause he would kill at their request paving the way to give dem full control of Waltham & Maxfield area. He became so famous DJs and foreigners wanted to meet him, honestly I don’t think there is a community in Jamaica dat did not feel his hand. One day he came to have a reasoning with me, he knew I never like wat he was doing so he usually hide from me or jus avoid me out of respect. 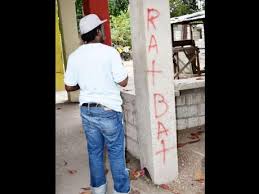 on this day he came n said that he was so sorry for the life he had chosen cause he is in love with someone who don’t know him or love him because he is Duxie he wish he could live like a normal man, go have an ice cream at Devon house go to Carib walk in halfway tree holding hands etc but it’s too late I can turn back i have kill so much ppl my enemies are closer than I think and are disguise as friends. I sat there and I look at him I was so disappointed in him I hug him and cried he also cried I never said anything word but I knew he felt everything I was saying inside I never saw him back after that two weeks later he was shot n killed by friends contracted to kill him I never cried as I remembered the last thing he said to me before he left dat day, ” if mi dead nuh badda cry cause we cry together aready. Police or mi friend dem ago kill mi there is no happy ending family a suh it set . A nuff boy three points mi tek suh a Bwoy ago tek mines one day till then a str8 badness wild life Four corner darkness Night. Again Nite time boss fi life and after life fullybad” Mi still upset with him.He had the potential to anything he wanted but he choose to be a killer n died like a dog!!!! Youth avoid the fame n glitter that comes with crime it’s a short life span a suicide!!!