THE U.S A TRY LEGGO DEM PORK PAN JA…DI FARMERS NOT HAVING IT

The United States has renewed its call to be allowed to export pork to Jamaica.

For the past two years, Jamaican pig farmers have supplied most of the pork consumed locally, with the country only looking abroad for pig’s tail and certain cuts to make bacon and sausages.

But now, US agricultural attachÈ to the Dominican Republic, Haiti and Jamaica, Morgan Perkins, says the Americans are putting back on the table their desire to export pork to the island.

“From the US standpoint, we are asking the Government to look at a request we have made several times, to be allowed to sell pork in the Jamaican market,” Perkins told The Sunday Gleaner.

“We hope to see that trade relationship grow, and one of the things we hope to see grow in that is US exports as well.”

But president of the Jamaica Pig Farmers’ Association (JPFA), Hanif Brown, says the US is being unreasonable, as that country already benefits significantly from the local pork industry with huge sums being spent on importing various components of the sector, such as pregnancy test machines, software and antibiotics.

“The US and Canada, or any other first-world country for that matter, shouldn’t want to have their cake and eat it,” said Brown.

“The reason I say that is because farmers spend a lot of money importing breeding stocks out of Canada and equipment out of the US.

“So to invest our money buying equipment, corn and soya, plus premix out of the US to facilitate the farming of pigs, and then when you are finish now the farmers must compete again with importation of the finished products out of the US, that’s having your cake and eating it.”

The JPFA president believes that even if the US was to eventually be permitted to enter the Jamaican market, it cannot be a one-way street where pork is concerned.

“Nobody imports from us right now, outside of CARICOM, where we export hams and stuff, but not fresh pork and sometimes it is still a battle to get it in. 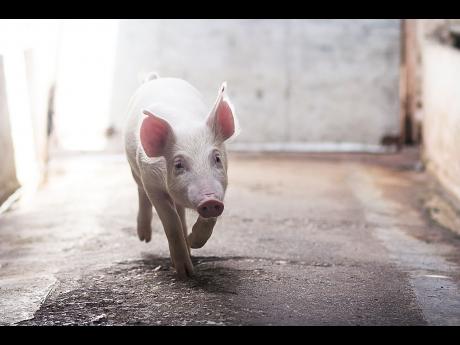 Brown argued that following a shortage of pork on the local market last year, farmers spent a significant amount of money on retooling in order to get the market to the point where it is currently at equilibrium and, therefore, there is no need for imports.

DETRIMENTAL TO FARMERS
“For farmers, it would be a detriment if we saw pork imports because, at the end of the day, our little country does not subsidise anything that we farmers use. Every farming sector in the United States is subsidised, and as such their pork cost going to come out lower than ours.

“And you have some people who I think don’t have any moral obligation to the country, and so, for $10 a pound cheaper for pork, they would rather import when it can be had here, and no imported pork will have the taste of our Jamaican pork.”

Brown also fears that opening the market to the US could expose the country to diseases that have been known to affect pigs in that country.

“The reason permits have not been granted is not to say we are going against the free trade agreement with another country, but because of the fact that, from a veterinary point of view, they have all these diseases at times,” Brown reasoned.

“We pride ourselves that the industry is free of disease or certain disease that can be detrimental. Take the US, for example, that had a disease last year and the year before, porcine epidemic diarrhoea virus, that though it does not affect human beings wiped out an entire farm overnight. So you have disease that will wipe out our investment, so we have to protect ourselves from all of them.”

5 thoughts on “THE U.S A TRY LEGGO DEM PORK PAN JA…DI FARMERS NOT HAVING IT”