THIS WITNESS AINT LYING,HER SON ALSO HAD BAD LEG AND WAS SHOT AND MAE TO DIE PAINFULLY 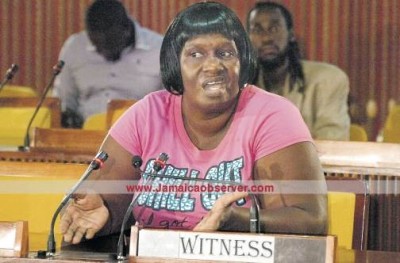 A mother testified in the Tivoli Enquiry that her 29-year-old son was taken away from their Denham Town home on Sunday May 30, 2010 and killed by soldiers.
Paulette Wellington, the enquiry’s 24th witness, testified that she found out on Wednesday of the following week that her son Sheldon Davis was killed. She said a policewoman at the Bureau of Special Investigations told her that Davis was killed at the Blood Bank after attempting to take away a soldier’s gun.
She said she went to the Blood Bank on the Thursday and was told the same thing by a soldier there.
There, she said she started started ‘bawling out Jesus’ and told the soldiers to “fix up” their statement because her son wouldn’t do such a thing.
She testified during her examination-in-chief, led by Simone Mayhew, that her son wasn’t a gunman and that he didn’t have a criminal record.
Wellington’s cross-examination was deferred because the matter regarding her son’s killing is currently before the coroners court. The enquiry expressed concerns that she may prejudice herself under cross-examination before she gives evidence at the coroner’s hearing.
Also yesterday, the commission instructed the Independent Commission of Investigations (INDECOM) to provide a statement on the investigation into the disappearance of 16-year-old Dale Davis during the May 2010 operation to apprehend then Tivoli Gardens don Christopher ‘Dudus’ Coke.
Dale’s mother, Dawn Brown, testified during the enquiry on Thursday that a representative from INDECOM told her that DNA results indicated that her son was dead.
News of his disappearance made headlines after it came to light, following the operation, that he was missing and was likely dead.
Meanwhile, a group named Lawyers Christian Fellowship informed the commission that it would be assisting the Office of the Public Defender to provide legal representation for residents of Tivoli Gardens who are without lawyers.
Yesterday’s proceedings marked the end of the first session of the enquiry into the May 2010 operation by the security forces.
The next session starts on February 9 with new witnesses.
Caption:
Paulette Wellington testifying during the Tivoli Enquiry about the death of her 29-year-old son whom she said was shot by soldiers in May 2010. (PHOTO: MICHAEL GORDON)