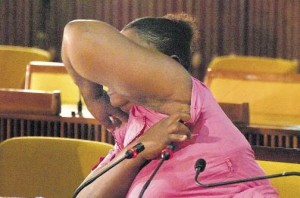 TIVOLI Gardens resident Collette Robinson yesterday testified that she didn’t see who shot her during the police/military operation to apprehend Christopher ‘Dudus’ Coke, yet she insisted that it was a soldier and repeatedly stressed that she wanted money for the injury she sustained.
But that wasn’t her only contradictory evidence at the West Kingston enquiry, as she was confronted, under cross-examination by attorney Peter Champagnie — one of several attorneys representing the Jamaica Defence Force — with two statements which indicated that she wasn’t bleeding for 12 hours before receiving medical attention as she had claimed.
Robinson testified, in her examination-in-chief which was led by Queen’s Counsel Garth McBean, that she was at home on May 25, 2010 when, at around 7:00 am, she was shot in the left arm, leaving a “big, big hole that you can put your fist in” .
She said she was being accompanied to the Kingston Public Hospital by her daughter and neighbour when she was stopped by a soldier who was on the roof of the Coronation Market. She said the soldier used expletives to her and told her to go “home go dead” after she told him that she had been shot.
In the end, Robinson said she was only able to make it to the hospital around 7:00 pm, some 12 hours later, and was admitted for two weeks.
Asked by McBean if she saw who shot her, Robinson said: “I didn’t see who shot me, but I got shot.”
She said she hasn’t received any compensation.
Under cross-examination from Deborah Martin, one of the lawyers for the Jamaica Constabulary Force, Robinson said she knew nothing of blockades in the community, knew nothing about Coke or any of the events surrounding him, and insisted that she only heard shots from the police and soldiers.
“You only know about compensation? Martin asked.
“Yes, compensation for my shot,” Robinson responded.
“But you don’t know who shot you,” Martin said before ending her cross-examination of the witness.
Taking his turn with Robinson, Champagnie asked her if she told the truth in a statement she gave the Public Defender. to which she answered in the affirmative.
“If somebody was to say it wasn’t in the evening you got shot, that person would be a liar?” he asked.
“That person would be a liar because I know when I got shot,” Robinson responded.
The attorney pointed out to her that she had, in fact, said in the June 2010 statement that she was shot at 7:00 pm and not 7:00 am.
But Robinson insisted that she was shot in the morning and that the person who took her statement, which she signed after it was read over to her, had made a mistake with the time.
Champagnie again pointed out to her that she had repeated, in another statement taken by someone else in July 2010, that she was shot at 7:00 pm.
“No, no, 7:00 am,” she retorted, insisting that the individual who took the second statement had also made a mistake.
Robinson said in a third statement last month that she was shot in the morning.
On the issue of whether she saw who shot her, Robinson told Champagnie that she made a mistake when she told McBean that she didn’t see who shot her. But in the end she admitted to Champagnie that actually she didn’t see who shot her.
Earlier, the enquiry’s fourth witness, Troy Palmer, testified that he received injuries to his knee and back after being struck by a soldier on May 24, 2010 during the search for Coke. Palmer also said that one of his shops was destroyed, items in his house damaged and about $100,000 stolen. He told the enquiry that he lost a total of a $1 million as a result of damage to his property and his missing bike.
But under cross-examination from attorney Linton Graham, representing the JDF, Palmer said that he only sought emergency surgery in 2013 and 2014 at the University Hospital of the West Indies, but not in 2010 after the incident.
Palmer said that in his examination-in-chief that he was detained for four days at the National Arena, but under cross-examination it was pointed out that a document that he provided stated that he was detained on May 27, 2010 and released the same day. Questioned by attorney Michael Lorne about this, he explained that the police made an error with the date and when he attempted to get it corrected he was told to leave the premises.
Yesterday’s proceedings came to an end with a sixth witness, Lovett Bryan, who also spoke of abuse by the soldiers.
The enquiry continues today at the Jamaica Conference Centre in downtown Kingston.