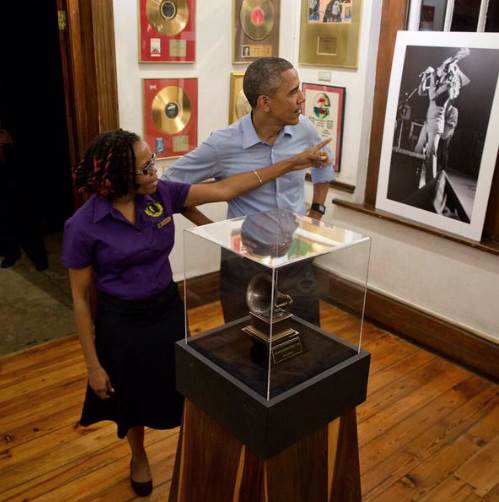 UNITED States President Barack Obama has been a fan of Reggae Legend Bob Marley from high school, so it was quite fitting that Air Force One, en route to Jamaica from the United States on Wednesday night, was permeated with the sound of Marley music.

Following his official welcome at the Norman Manley International Airport in Kingston, Obama flew straight to Up Park Camp, ditched his jacket and tie, rolled up his sleeves and headed to the Bob Marley Museum on Hope Road in St Andrew — a visit that was not on his official itinerary.

The Beast, the president’s armoured limousine, pulled up at the museum around 8:25 pm and he got out promptly.

“Oh yes! This is it! Bob Marley!” were the first words from his mouth after exiting the vehicle.

Genet Natasha Clarke would be his guide for the 25-minute tour.

He walked over to her, gave her a hug and said, “Hi, Natasha, how are you?”

“Photo op,” Obama said, posing with Clarke before heading inside the house — where Marley lived from 1975 until his death in 1981 — to begin his tour.

The president grinned from ear to ear at the fulfilment of one of his long-held dreams.

The tour begun in the Hologram Room where there is a hologram of Marley, made in 2001 from a photo of the reggae legend at his One Love concert in 1978.

“Oh,” Obama said, “and that is Emperor Haile Selassie in the back.”

From here, Obama was taken to the Award Room where Marley’s Lifetime Achievement Grammy, among other gold and platinum records, are kept.

The president’s excitement was evident as upon seeing his favourite album, Exodus, he started singing loudly — word for word — the title track.

“He was singing very good,” Clarke told the Jamaica Observer.

He wanted to know how long Marley lived at the premises and when he started recording there. Clarke informed Obama that Marley built the studio at the house shortly after buying the property in 1975. The president seemed pleased to learn that the albums, Uprising, Survival and Confrontation – which form a part of the president’s collection of Marley’s albums – were recorded at the house.

Clarke then challenged Obama to do the ‘three-steps-at-a-time’ walk, up the 16 flights of stairs leading to the upper floor — Marley’s exercise routine.

“Oh no, I’m just going to do one,” Obama said, explaining that he was tired.

At the Shot Room, where an attempt was made on Marley’s life on December 3, 1976 — two days before the now iconic ‘peace concert’ — Obama watched a two-minute clip of Marley speaking. In the clip Marley was saying that there was a voice of right or wrong within everyone and that it’s “up to you to listen and do the right thing”.

Obama nodded in agreement and sung along to the song Ambush In The Night, which Marley wrote after being shot.