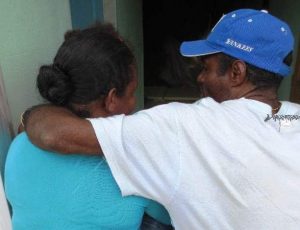 ANDY DOWNEY escaped Carrera Island Prison six years ago by swimming to the mainland, then set off on an epic journey to South America to find the woman he loved.
The Express reported the story, detailing how Downey found the woman and of her eventually coming to Trinidad, where they settled down to make a new life and do right by the children they shared.
Andy Downey left behind his past and his woman made it out of the slums of Guiria, Venezuela.
Their commitment was sealed when they were married in July, with their three children at their sides.
However, decisions made by the Immigration Department in San Fernando last month may mean the family will be torn apart and, should the rulings stand, Downey’s wife and two of the children will be deemed as illegal residents and deported.
Their passports have already been seized and, without them, the residency applications cannot be completed.
The Downeys did not have the financial means to challenge the ruling, but attorney Randy Depoo, who specialises in immigration law, has stepped forward to represent the family.
Depoo believes that the treatment meted out to the Downeys was nothing short of callous and uncaring, and decisions taken by immigration officials are unlawful and must be reversed.
Last Friday, Depoo wrote to Chief Immigration Officer Charmaine Gandhi-Andrews and National Security Minister Edmund Dillon asking for their immediate intervention.
According to the letter, Downey initially met his wife in early 2009 while she visited Trinidad for about a month. Their relationship produced a baby girl who was conceived in Trinidad and born in Venezuela on May 12, 2009. On the child’s birth certificate, Andy Downey is listed as the father.
Their second child was conceived in Venezuela around September 2010 when Downey visited that country.
The child was born on June 17, 2011, and on her birth certificate Downey is listed as the father.
Their third child was conceived and born in Trinidad on August 18 this year, a month after they were married in a civil ceremony at the Victoria District Revenue Office in San Fernando.
According to the letter, Downey’s wife has been travelling regularly between Venezuela and Trinidad by boat since around June 2015, always checking in with the Immigration authorities. She always returned to Venezuela before her allotted time expired. On her most recent arrival, she was permitted to remain until Friday, September 2 this year, the letter stated.
According to the letter, Downey’s baby was born 15 days prior to the expiry of the mother’s time in Trinidad.
“She was so preoccupied with the care of her infant child that she absent-mindedly missed her appointment at the Immigration Department. When she realised her error over the weekend, she immediately went to the Immigration Division on the very next business day, Monday, September 5, 2016,” Depoo submitted.
At the San Fernando Office on September 5, the woman’s passport and those of her two Venezuelan children were retained and they were required to return to the extension Office in San Fernando on September 29.
Downey’s wife, who was accompanied by her Trinidadian sister-in-law, explained that she was married to a Trinidadian and intended to apply for residence in Trinidad and Tobago, Depoo stated.
“It was explained to her that the officer indicated that she and her two Venezuela-born children were required to leave the country as they had overstayed by three days. Further, her Trinidad-born son Anthony was also illegal in the country because he was delivered at a public hospital,” the letter stated.
“Mrs Downey was told that she needed to return with airline tickets for everyone. She explained that it was much cheaper and more convenient for her to take a boat from San Fernando and travel to Guiria where she lives. Once she gets off a boat in Guiria she is at her home within minutes. The Simon Bolivar airport in Miaquetia is about 682 kilometres from Guiria and, under the best conditions, takes about 11 hours by road. Despite this, the officer was adamant that they produce airline tickets.”
The Chief Immigration Officer and National Security Minister were told that the Downeys went to the Ministry of National Security in Port of Spain on September 19 in an attempt to file a residence application.
“They were told by an official that they could not initiate any paperwork without Mrs Downey’s passport. Of course, the passport is currently in the custody of the Immigration officials in San Fernando, frustrating their efforts to file a residence application.”
Depoo said that the residency application was based on Section 6 (1) (c) of the Immigration Act, which states that a person who is “the spouse of a citizen or resident of Trinidad and Tobago” may apply for resident status.
Section 6 (2) states that such a person must have entered the country legally, is not in a prohibited class as defined by Section 8 of the Act, and is a person of good character as evidenced by a police certificate of good character.
According to Depoo, Downey’s wife is in the process of submitting the application forms and the requisite supporting documents to the Ministry of National Security to obtain a Certificate of Citizenship of Trinidad and Tobago.
“Mrs Downey meets all of the above-referenced requirements, as she is married to a Trinidadian citizen, entered the country, is not a member of a prohibited class, and has absolutely no involvement with the law,” the attorney stated in his letter, which also explained that two of Andy Downey’s children were citizens of Trinidad and Tobago by birth.
Depoo asked that the passports belonging to Downey’s wife and children be returned and that they be granted an extension until their claim to Trinidadian citizenship was adjudicated.
The Express was unable to make contact with Chief Immigration Officer Gandhi-Andrews last Friday.
The National Security Ministry said the letter dispatched to the minister would be investigated.

5 thoughts on “TRINIDAD LOVE DEPORT LIKE DEM A BIG FARRIN”