UPUP OUR GIRLS IN RIO 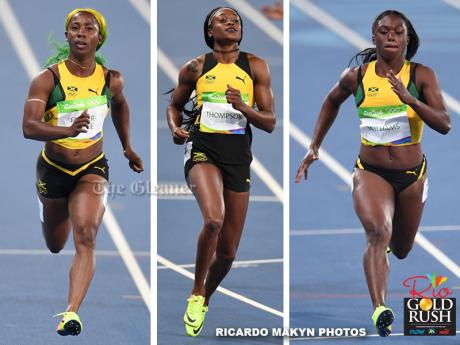 (From left) Fraser-Pryce, Thompson and Williams will all move to the semi-final of the women’s 100 metres.

Jamaica’s history-chasing sprinter, Shelly-Ann Fraser-Pryce has laid down the gauntlet for her rivals as she clocked the fastest time in the heats of the women’s 100m for the Jamaican trio heading into the semis.

Running out of lane nine in heat four, Fraser-Pryce blew from the blocks before shutting off in the final 20 metres to win the event in 10.96 seconds.

The diminutive sprinter who has been dealing with a troublesome toe injury all season, is the only woman to break 10 seconds in the heats.

Fraser-Pryce is seeking to become the first woman to win three straight gold medals in the 100m at the Olympic Games.

Jamaica’s other medal hopeful in the event, Elaine Thompson won her heat in 11.21 seconds.

Thompson, who matched Fraser-Pryce’s national record of 10.70 at this year’s National Championships, is a major contender for the gold medal.

Meanwhile, Jamaica’s other competitor in the event, Christania Williams also advanced to the next round after she finished second in her heat in 11.27 seconds.

The race was won by Trinidad and Tobago’s Michelle-Lee Ahye in 11.00 seconds.

Williams, a former Edwin Allen High School star athlete, surprised many when she ran a personal best 10.97 to finish third in the final at the National Championships behind Thompson and Fraser-Pryce in June.

PROFILE – Shelly-Ann Fraser-Pryce
Age: 29 years old
High School: Wolmer’s High School
Tertiary Education: University of Technology, Jamaica
Events: Women’s100m, 4x100m relay
Personal Best: 100m – 10.70s
Interesting Facts:
Her personal goal is shaving one tenth of a second off her personal best of 10.70s
Shelly-Ann not forgetting her roots, goes to church every Sunday since she was four years old in her old neighbourhood of Waterhouse.
She is called the ‘Pocket Rocket’.

8 thoughts on “UPUP OUR GIRLS IN RIO”