Luis Alberta Silva has been a fan of Jamaican sprinter Usain Bolt since he saw him beat his chest on his way to gold in the 100 metres at the 2008 Beijing Olympic Games.

Meeting the man himself has been a dream ever since.

With the Olympic Games in his backyard, Silva, 58, a resident of Rio de Janeiro, knew that this would be his greatest chance to get close to the Jamaican.

Sporting a white T-shirt with the words ‘The Four Greatest’ over pictures of Bolt, tennis star Novak Djokavic, swimmer Michael Phelps and Russian pole vaulter Yelena Isinbayeva, Silva waited 12 hours at the gate of Jamaica’s pre-Olympic base with one thing on his mind – meeting Bolt and securing an autograph from the world 100m and 200m record holder.

“I have been here since 6 a.m. today,” he told The Gleaner, as he held up a hand-written sign pleading to Bolt for an autograph, close to 6 p.m. “Like you see on my shirt, I consider him to be one of the four best athletes in the world.

“The thing I like the most about him is the way he runs and the way he feels about himself. He knows he’s the best; he’s the guy, and he knows it, and he makes sure everyone else knows it. He’s the best,” Silva said through a translator. 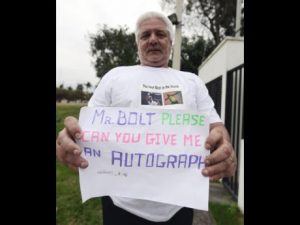 Silva, a doorman by profession, said he could not afford the ticket prices to see Bolt compete at the Olympics and knew better than to try meeting the Jamaican after he moves with the Jamaican team to the Olympic Village next week.

“I can’t afford to see him at the stadium; it’s too expensive, that’s why I am here and hoping with everything that I have that I get to see him and get his autograph here.

Silva would get his wish a few minutes later, as Bolt and the rest of the team returned from a training session.

The sprinter, who was ushered inside by security personnel assigned to the team, would later sign Silva’s shirt, penning his autograph over his own image on a shirt the Brazilian is sure to cherish.