Hundreds of used condoms believed to be used in the sex trade are being fished from the South Gully in Montego Bay, St James, on a regular basis.

According the Jamaica Environment Trust (JET), which released the findings of the research on Wednesday, large quantities of used condoms contributed to heaps of solid waste being thrown into the gully.

The findings indicate that more than 100 used condoms are among the debris fished from the mouth of the South Gully during bi-monthly clean-ups. 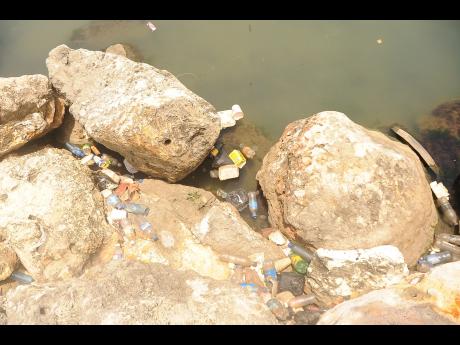 “These were suspected to be the result of increased in prostitution activities near the gully,” Suzanne Stanley, deputy CEO of JET, reported.

“There are night adult entertainment clubs that were observed in proximity to the gully. So because these are informal businesses and activities, there are not really any solid waste management system in place to deal with the garbage coming out of the establishment, and a lot of that waste makes it into the gully,” she added

In addition, human waste was also revealed to be a major factor, and is usually thrown into the gully in Styrofoam boxes and plastic bags.

“This poses a serious challenge, not only for recreational use of our beaches, but also for the persons who are cleaning the debris from the boom,” she outlined.

The environmental group had installed a debris containment boom at the mouth of the South Gully in June 2015. It was designed to trap the floating solid waste coming from the gully. The initiative has been reaping some success over the past year despite an increase in the volume of waste material.

JET stated that millions of dollars have been spent clearing the gully and other waterways in Montego Bay, but the littering problem still remains and contributes to various issues. Among these include flooding and the invasion of pests as well as the severe impact on the eco-system.

However, based on the results of the research, the Trust has put forward a number of recommendations.

These include greater enforcement of anti-dumping laws; greater clarity on which state agency is responsible for gully maintenance; establish a regular and well publicised gully cleaning schedule; and increased frequency of collection.

JET also noted that there should be ‘Nuh Dutty Up Jamaica’ public educational campaigns targeted specifically at Montego Bay.