In less than 24 hours, Police operating in Kingston West and St. Catherine removed 13 firearms and over 2000 rounds of ammunition from the nation’s streets and apprehended the leader of the Scaredem Crew Gang in separate incidents between Wednesday, May 28 and Thursday, May 29.

In the first incident, about 1:30 last afternoon, the Spanish Town Police reported that a team of officers was on patrol in Red Pond, Frazers Content, St. Catherine, when a man was seen acting suspiciously. When approached by the Police, he threw a bag he was carrying to the ground. He was accosted and the bag retrieved, searched and a .38 revolver with one 9mm round was found. He was taken into custody where formal charges will be laid. 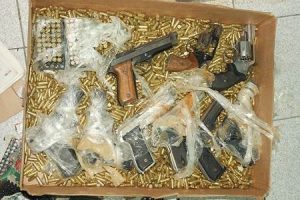 About 5:20 this morning, a team of officers carried out an operation on Percy Street, in Denham Town, Kingston 14, which led to the apprehension of the leader of the Scaredem Crew Gang and a female companion. An Uzi submachine gun, one .38 revolver and a 9mm Bryco pistol containing three 9mm cartridges were taken from them.

Later today, officers attached to the St. Catherine South Division were carrying out stop and search activities along the Cumberland main road when the driver of a Toyota Corolla station wagon was signaled to stop. The driver refused to comply and a chase ensued.