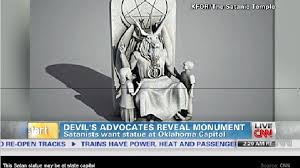 (CNN) – Satanists have unveiled their design for a proposed statue at the Oklahoma state Capitol, including a place for people to sit on the devil’s lap “for inspiration and contemplation.”

The New York-based Satanic Temple submitted its proposal to Oklahoma officials this month after applying for a spot on Capitol grounds late last year. The Satanists say their statue would “complement and contrast” with a Ten Commandments monument placed at the Capitol in Oklahoma City in 2012.

The Satanists’ proposed monument depicts Baphomet, a goat-headed pagan idol sitting on a 7-foot-tall throne inscribed with an inverted pentagram. In an artist’s rendering provided by the Satanic Temple, smiling children look adoringly at the devilish figure.

“The statue will serve as a beacon calling for compassion and empathy among all living creatures,” Lucien Greaves, a spokesman for the Satanic Temple, said in a prepared statement. “The statue will also have a functional purpose as a chair where people of all ages may sit on the lap of Satan for inspiration and contemplation.”

According to its Indiegogo page, the Satanists have raised more than $16,000 toward their goal of $20,000 for the monument, which Greaves said would “be a historical marker commemorating the scapegoats, the marginalized, the demonized minority and the unjustly outcast.”

The Temple of Satan is less a religious body organized around rituals and regular meetings than a roving band of political provocateurs, according to Greaves. They believe Satan is a “literary construct,” the spokesman said, not an actual being with horns and hooves.

“Prisons are built with stones of Law, Brothels with bricks of Religion” runs the Blake quotation. The 18th-century poet was a Christian, albeit one with a mystical bent and little use for traditional morality.

The statue’s main figure, Baphomet, has long been associated with Satan, Greaves said. In the 12th century, the Knights Templar, a group of Christian crusaders, were accused of worshiping Baphomet in their secretive rituals.

“From the mythology created by these accusations against the Templars, we now have a symbol for Satan pictured as a goat-headed beast,” Greaves said.

“What will disqualify them has really nothing to do with Satan as such; it’s that it has no historical significance for the state of Oklahoma,” he said.

Trait Thompson, chairman of Oklahoma’s Capitol Preservation Committee, said he has not received the Satanists’ proposed design yet. He also said that no applications will be considered until a lawsuit over the Ten Commandments monument is settled.

The American Civil Liberties Union has sued over Oklahoma’s Ten Commandments monument, calling it an unconstitutional government endorsement of religion.

After news broke of the Satanists’ proposal, the state was flooded with requests from religious groups seeking to erect monuments to their own faith, including Hindus and Pastafarians, a satirical religion that “worships” the Flying Spaghetti Monster.

An Oklahoma lawmaker told CNN that the Satanists’ message wouldn’t fly in the Bible Belt state, where nearly two-thirds of the population is Christian.

0 thoughts on “WELL WELL………….SATANISTS DESIGN FOR THE STATEHOUSE STATUE”