WHAT A SHAME, STUDENTS BAD BEHAVIOR WILL COST THEM OVERSEAS WORK PROGAM

This, as one of the major local facilitators of the programme, the Kingston-based Career Services International (CSI), said it intends to reduce the number of Jamaicans it signs up next year due to the bad reputation some students have gained.

According to CSI head Otego Thompson, this year, his company sent off 460 students on the programme with 38 coming from Thailand, 29 from China, 26 from Poland, a few from Kosovo and Albania and the rest, more than 300, from Jamaica.

“We are cutting back on the number of Jamaican students significantly,” Thompson told The Sunday Gleaner.

“We are going to keep our recruiting up to the 460 students, but we are cutting the number of Jamaicans down to 200. So we expect to have 100 Chinese, 100 Thai students, and a few more Polish.”

The summer programme was established as a cultural-exchange system, but according to Thompson, many of the Jamaican students go to the US looking to grab as much money as possible and this has led them to engage in unethical practices.

“We have a large number of host companies or employers that we work with directly and for the past six years, we have been providing Jamaicans to these employers,” said Thompson. 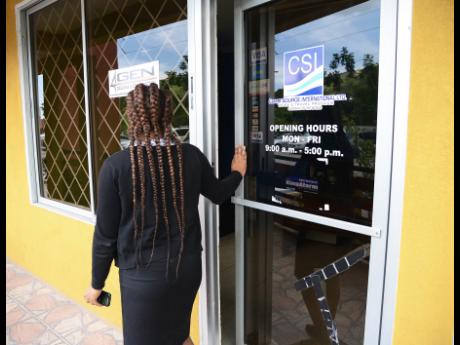 “But numerous complaints keep coming from the employers. They complain about work ethics, students not turning up to work on time. But the main problem that we are having is that these employers actually sponsor these students to come in and have a job; provide sponsorship where they could actually get a visa but some of them walk off the job to go and work for other persons.”

ABANDONING SPONSORSHIP
According to Thompson, despite the students being made aware of how much they will be paid before they leave for the jobs, when they reach the US and see where they can make more money working for other employers, some of them abandon their sponsors for greener pastures.

“They have to remember that their primary employers are their priority, as they brought them there,” said Thompson.

“When the just get up and leave it doesn’t just look bad on CSI, it looks bad on the entire programme. So there are a lot of complaints and we have discussed this with our employers and we think it is a good idea (to get more students from other countries) and we are going to explore it.

“A next thing we realised is the Jamaicans stay in a clique and whenever you have that in a workplace you find that the negative energy spreads like wildfire. So for example you have two Jamaicans who are doing cashiering and they say ‘today we are going to call in sick because we have a next job to go on’; it is not the same culture of the Chinese.”

The CSI head pointed to an annual Jamaica Day event that his company host in partnership with sponsors in the US on August 1, where the Jamaican food, culture and games are shared with persons from various countries each year as one of the cultural events shunned by some students on the programme.

“The Chinese and students from the other nations are excited and making plans as to what they’re going to showcase. But only a few Jamaicans are interested, some saying they have to work, so I have sent an email asking the employers to not have anyone work on that day, so even if they don’t attend they won’t be working,” said Thompson.

According to Thompson changes have to be made and even though they will have a negative impact on scores of Jamaicans who will lose the opportunity to participate in the programme, they are necessary if it is to be maintained, for the satisfaction of sponsors and for business.

10 thoughts on “WHAT A SHAME, STUDENTS BAD BEHAVIOR WILL COST THEM OVERSEAS WORK PROGAM”