WHO IS CHRISTOPER KERR 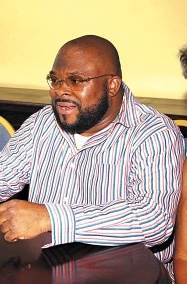 Who is Christopher Kerr (Donovan Watson Kerr)? Why does he have so many identities?He was accused of killing one individual at a JLP meeting in 2012 and shooting another person recently. That person fails to show up for identity parade…case dropped (Why?). What name did this guy get his licensed firearm in?
Is this the same individual who owns a Jet, has a Canadian Passport, etc.(see Observer Article) and is known to have many ongoing real estate developments in Kingston/St. Andrews? The only photo of him appeared in the Observer on July 11, 2011. Why is he changing his name from Donovan to Christopher? What is he hiding? Why so many identities? What else is he involved in? The Gleaner
————————————————————————————–
http://jamaica-gleaner.com/latest/article.php?id=54091
—————————————————————————————
KINGSTON, Jamaica:
Embattled businessman Christopher Kerr was this morning denied bail when he appeared in the Corporate Area Resident Magistrate Court on fraud charges.
Kerr, who is a real estate developer, is charged with four counts of forgery and two counts of uttering forged documents.
Prosecutors alleged that he was found in possession of three passports, two driver’s licences, two taxpayer registration numbers and four birth certificates in different names.
Investigators have also alleged that the first passport was obtained in 2000 and that some of them contained United States and Canadian visas.
In applying for bail, Kerr’s attorney Hugh Wildman told the court that his client was born Donovan Watson Kerr, but did a deed poll to change his name to Christoper Kerr.
Anticipating the name change, Wildman said the businessman began using the name Christopher and argued that there is nothing to show malfeasance.
However, in denying bail, Senior Resident Magistrate Judith Pusey liked the allegations to identity theft and raised questions about his true identity.
Kerr is scheduled to return to court on August 12 when he will go on trial.
http://jamaica-gleaner.com/latest/article.php?id=54211
—————————————————————————————
‘I’m not the X6 suspect’
Land developer Chris Kerr not subject of Sunday Observer story
Monday, July 11, 2011
http://www.jamaicaobserver.com/assets/6638535/DSC_8958.jpg
REAL estate developer Christopher Kerr has dismissed public speculation that he is the suspect pointed to in yesterday’s Sunday Observer lead story titled ‘Who is the X6 killer?
The 35-year-old accomplished land developer — who drives a Toyota Land Cruiser — said he had been inundated with calls from friends and associates and would like to make it clear that he is not wanted by the police in connection with the July 1 shooting death of 17-year-old Kingston College student Khajeel Mais.
“I don’t own any X6, never driven one and have no desire to own an X6,” said Kerr.
He was speaking in the presence of his attorneys Jennifer Messado and Patrick Bailey during a visit to the Observer’s Kingston headquarters as a result of the article.
Added Messado: “He owns neither an X5 nor an X6 and has never owned an X5 or an X6.”
Additionally, Kerr said he has had no association, business or otherwise, with former Tivoli Gardens strongman Christopher ‘Dudus’ Coke.
The story said that the X6 killer — who has fled to the United States since the shooting — was associated with Coke, who is to face trial in New York on September 12 on drug-trafficking and gunrunning charges.
Other similarities between Kerr and those of the suspect in the article, Bailey outlined, are the age group, the holding of a Canadian passport, the dark complexion, real estate developments in Liguanea, Norbrook, Constant Spring and on Red Hills Road, the ownership of a jet, and the involvement in an accident.
Yesterday, Messado listed Kerr’s development as St Michael’s Rivera in Liguanea; Gran Oaks at the Corner of Paddington Terrace and Liguanea Avenue, Plantation Spring on Red Hills Road and Front Nine in Norbrook. The name of his company is Plantation Development. Kerr has been a real estate developer for the past 11 years and is registered with the Real Estate Board.
The article also said that the suspect had strong ties with the police and with both political parties, however, he has greater loyalty to the People’s National Party.
Yesterday, Kerr and his lawyers made it clear that while he associates with people from both sides of the political divide, he has no loyalty to either party.
“A lot of persons have determined that he is the person the article is referring to. We want to nip it in the bud,” said Bailey.
Mais’s killer fled to US shortly after the shooting incident in the Havendale community of St Andrew. The killing occurred after the taxi in which the teen was travelling had an accident with the BMW X6, a luxury sport utility vehicle. Arrangements are being made by the police to have the suspect captured and returned to the island.
http://www.jamaicaobserver.com/news/I-m-not-the-X6-suspect_9173333

0 thoughts on “WHO IS CHRISTOPER KERR”

28 Users Online
Back to top