WHY KARTEL GOT LIFE 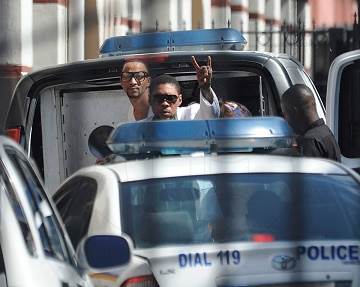 A muffled cry came from the back of the number two courtroom on the passing of the sentences, and persisted outside. There, the women wept bitterly and two had to be helped to walk.

The news soon reached the throng of people — mostly women — gathered on Barry Street outside the Supreme Court in downtown Kingston and soon the crowd was chanting in unison, “Free World Boss! Free World Boss!” as police struggled clear the thoroughfare.

Workmen stood atop the old National Commercial Bank building, which is being converted into an extension of the High Court, to get a glimpse of the excitement as office workers peered from opened windows, sticking out their torsos.

The courtroom was packed with police officers and court workers, to the point where there was only standing room.

In handing down the sentences, Justice Campbell outlined that he took into consideration the fact that the murder of Clive ‘Lizard’ Williams on August 16, 2011 was planned and premeditated; that Williams’ body had been concealed; the mental stress Williams had been put through before his murder; and the attempt to destroy evidence.

Still, Campbell said that most of these wouldn’t apply to St John and that he was mindful that the men had varying roles in the killing at a house owned by Vybz Kartel in Havendale, St Andrew over two missing guns.

Campbell asked the men to stand to receive their sentences, which they all did with stern faces. When the men were being cuffed to be led away, St John started chewing vigorously, displaying a defiant look.

The crying drew the men’s attention and at this point they fixed their gaze at their weeping loved ones — a cousin of Kartel’s, a relative of St John’s and Camille Chow, the mother of Campbell’s child — behind them.

Before the sentences were handed down, attorney Pierre Rogers, who appears for St John and yesterday held for Tamika Harris, asked the court to deliver sentences of 15 years each for both men.

Michael Lorne, who represents Campbell, asked for a 15-year prison term and said that the judge could consider going lower, noting the judge’s history of imposing modest sentences. The lawyers said that the men were not beyond rehabilitation and that they could contribute to society if released early.

In asking for lenience for the men, Rogers quoted Jesus Christ from the Bible: “What you do to the least among them you do to me.”

Attorney Tom Tavares-Finson last week spoke on behalf of Vybz Kartel, who he said is maintaining his innocence. He said he wouldn’t be pleading for lenience because of this claim of innocence.

The attorneys had expressed an intention to appeal the March conviction and yesterday’s sentences.

Yesterday, supporters of Vybz Kartel played a game of cat and mouse with the police, running from Barry Street to Tower Street to King Street to Church Street, blocking traffic in the process as they tried getting a glimpse of the artiste leaving court. They shouted and railed against the police who were bent on maintaining order.

At one point, a woman in the crowd started singing loudly a line from Vybz Kartel’s recording, “Babylon say jail for me…” However, some passers-by could be heard commenting that the men got what they deserved and expressed disgust at the supporters.

At the back of the court, where the inmates are taken to be placed in prison trucks to be transported away, a large crowd of court workers, police officers, persons attending court and media workers gathered in the boiling sun to get a glimpse of Kartel.

Minutes to 2:00 pm, the artiste — decked in a white suit, an unknotted Calabar High School tie slung around his neck and a Calabar jersey — stepped out on the veranda area of the court to enter the prison van. Cameras and cellphones started clicking. The artiste spoke with Shawn Storm and the two could be seen laughing.

As he entered the van, he flashed the Gaza ‘W’ at Jamaica Observer Photo Editor Bryan Cummings and smiled, before being whisked away with his co-accused to begin their sentences at the Tower Street Adult Remand Centre, popularly known as General Penitentiary.

0 thoughts on “WHY KARTEL GOT LIFE”