WHY YOURE NOT ACHIEVING ALL THAT THE BIBLE HAS PROMISED 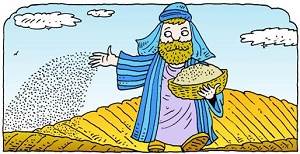 Why are you not achieving all that the bible has promised
Have you ever wondered why was it that in the parable of the sower in Matthew 13; that the seeds
which were deposited on good ground brought forth 30, 60 and some a hundredfold? Wouldn’t you figure that since it’s good ground there should be a hundredfold harvest period!
Prior to us exposing the revelation of this particular biblical passage. let us bring meaning to the understanding of the symbols that were mentioned in this scripture. Firstly, The sower in this parable would be the Preacher, the seeds would be the word of God. The different grounds that the seed were sown in would represent the hearts of men..
The story then goes on to say how each heart received the word but its reaction to the word of God was different in comparison to each other. Now, just like you, I understood quite well why the different grounds that the seeds were sown into prior to the good ground did not pan out well. However, what always baffled me was the fact that; shouldn’t the seeds that were planted into the good ground automatically produce 100 fold, I mean after all it is good ground, right? Why is it that even though the ground was good in some cases 100 fold was not guaranteed or achieved in fact it clearly says that even on the good ground it would only produce some 30 and 60 fold. What was it that was causing the good ground not to produce 100 fold for everyone with a good heart?
Revelation time! Now, as you would recall the different grounds are symbolic of the hearts of men and the seeds represented the word of God. The one sowing the seeds would be your preacher/Apostle/Bishop/Pastors etc. Well, the good grounds which represented the hearts of men that were receptive to the word of God, nevertheless, it would be how much of the word of God that they BELIEVE that would determine how much of the word would be manifested to or for them.
For example, there are some churches that do not believe in witchcraft, speaking in tongues, the gifts of the spirit etc. So as a result they reject or dismiss scriptures that teaches on these things and how to operate in them. Therefore, they would see the manifestation of the scriptures that they teach and believe in but they leave their congregation ignorant and defenseless to the biblical teachings of the others scriptures that they dismiss. Thus, they only receive 30 and 60 fold of what the entire bible has promised.
This now explains why Jesus said, according to “YOUR” faith be it unto you, Matthew 9:29 and “All things are possible to “HIM” that “BELIEVE”” Mark 9:23. These two scriptures are a summary of the parable of the sower in Matthew 13. In that even thought you maybe a Believer of Jesus Christ or a Christian (good ground) this does not entitle you to a hundredfold manifestation of the scriptures. Instead it is the portions you believe that will determine your 30, 60 or 100 fold. In other word if you believe and have faith for portions of the scriptures, then expect portions in manifestations of the scriptures. On the other hand if you believe and have faith in everything that the bible says then expect a hundredfold manifestation of the scriptures in your life
Regrettably, I have met many Pastors who do not believe in the existence of witchcraft, even though the bible speaks extensively of it and have at the same time dismissed all biblical teaching of it. Unfortunately, the members are the ones that suffer because Satan uses this door of ignorance to take advantage of the spiritual law that says, “My people are destroyed because they lack knowledge” Hosea 4:6 and “My people are gone into captivity because they lack knowledge, Isaiah 5:13.
Any spiritual leader that insist on keeping you ignorant of spiritual laws and the over all teaching of the bible is a leader that customize scripture to fit their selfish agenda in an effort to manipulate their members. If they are not giving you the unadulterated word of God in its entirety or insist that you only believe certain part of the bible, then DO NOT EXPECT, ANTICIPATE OR LOOK FORWARD TO THE HUNDREDFOLD IN YOUR LIFE!
Written By: Kevin L A Ewing
[email protected]
kevinlaewing.blogspot.com