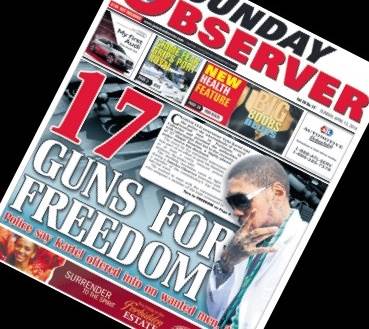 That fact appears to have been the reason for the Gleaner letter of the day, ‘Kartel story damages faith, trust in police’ on Tuesday, April 15, written by a senior editor of The Gleaner Arthur Hall, but signed by him in his capacity as VP, Press Association of Jamaica.

According to Mr Hall, people do not trust the police, and if they should give cops information on guns, to quote him, “Them will tell the gunman dem who will come fi me”. I agree with Arthur Hall that there is a big trust deficit between citizens and the police.

But then his letter begins to go downhill fast when he chooses to engage in specious reasoning. According to The Gleaner journalist and, a good one he is too, he is sore and vexed that any policeman could give information to any journalist about ‘bad men’, giving the cops information on not just where guns could possibly be found, but specific knowledge of where they could collect the weapons of death and destruction.

The Sunday Observer story specifically pointed out that just before Kartel’s arrest, when he came to the conclusion that the investigations were tightening up, he gave the cops information on where to find wanted men and arranged for them to recover 17 guns.

According to Mr Hall, his heart is broken and he is forced to ask of the cops, “Have they no sense?”

His letter says, almost as if he just started journalism school last week, “How could a senior cop who had this sort of information share it with journalists? Did that senior cop not think about the impact this could have on attempts by the force to get Jamaicans to share information with the police?”

So what are you saying, Mr Hall, you do not have policemen whom you move with as ‘bredrins’ who give you that type of information all the time? Most journalists who are worth more than a pound of salt get bits and pieces of that kind of information. But, I agree with Mr Hall, that we keep it to ourselves. It is definitely not for publication.

Mr Hall wants to have the best of both worlds when he claims that he is not directing his criticisms at the Sunday Observer but at the police.

Then he strikes the dramatic, one that journalism students should hold up as a masterpiece in specious reasoning: “Would that have been my name if I had provided information that led to the recovery of 17 guns?”

Mr Arthur Hall has completely taken his eyes off the focus of the Sunday Observer story. In his attempt to paint the police force as untrustworthy, he seems to have conveniently forgotten that the published piece was about a man who was one of Jamaica’s most prolific DJs/performers/recording artistes. It seems to have magically fallen into an abyss in Mr Hall’s brain that Vybz Kartel was just recently convicted for murder and sentenced to life in prison.

Matters that could not have come to the fore during the long trial were gleaned by the Sunday Observer and, in a country where guns and criminality often enjoy too close a relationship with our DJ/dancehall heroes, is there not some journalistic responsibility to the general public to open up that connection?

One gets the sense that on the Monday, before the letter was written, someone at The Gleaner kicked Arthur Hall under the desk on one ankle and suggested, “Are you going to take this lying down? The Sunday Observer got the best of us. Do something about it.”

Yesterday (Wednesday) when I telephoned Mr Hall he said emphatically, “Mark, if I had the information I would not have written the story.” Really, Arthur!

The dramatic flair flashed in his letter of the day was, in my estimation, a cry of sorrow and a loss of journalistic prominence for the day that The Gleaner has always reserved for itself on a Sunday.

When he wrote, “My faith in the police force has suffered a body blow. What can I say now when my friends in Maverley, Arnett and Nannyville tell me they don’t trust the police?” I wanted to say to him, “Arthur, you know and I know that you are an excellent journalist and oftentimes you have to hold back on publishing information that you have because of its sensitive nature, but you don’t want to sound like little Tommy Tucker.”

What is it in the Sunday Observer front page article that should give him any reason to believe that his faith in the police force has really suffered a “body blow”?

Arthur, stop being an actor and be the good journalist that you have always been. The sky is not about to fall. The John Browns and Mary Janes are not about to see their names published as those giving the police information on guns. You know it, and I know it. Step down off the stage because the applause you expected has not materialised. Come back home down here with us on terra firma.

Where he states, “Commissioner Ellington, do you understand now why Jamaicans are not providing your men and women with information?” could his mind extend to the preparation and groundwork that the police had to do to get those guns and information on

Could he also see the likelihood that when the ‘deal’ was taking place Kartel was not yet arrested and, according to the Sunday Observer story, Kartel had been trying to see if the investigators would play ‘ease up’ with him?

Another Gleaner letter has rubbished the Sunday Observer story by saying that if a deal had been struck the entertainer would not have been convicted to life in prison, but that letter writer seemed to have miscalculated the timelines.

Simple. Deal during trial is a deal. Anything before, and you are on your own.

Arthur Hall is my ‘bredrin’ and he occupies a huge building on North Street. Many years before he occupied a nobler place, the house of Fortis at 2a North Street.

There we were taught to speak our minds, but never with forked tongues.