WIGNALL SEH PNP A SCAVENGE ITSELF

The PNP has hit rock bottom by scavenging itself
By Mark Wignall Tuesday, August 23, 2016 0 Comments 0
IMG_0719
Less than two decades ago inside a fancy uptown hotel lobby I sat with the CEO of a foreign entity. The agreement struck between us was he would provide me with information but, no article could be generated from what he would tell me.

‘I just want you to know that those you may have trust in are not trustworthy people.’ Then came the bombshell. ‘The minister demanded and collected US$1 million. The deal was completed satisfactorily. My information is he is one of the richest members of the …’

Fast forward or, go backward just to bring confusion on the timeline, and a politician is giving me information on a colleague who seems to be highly ambitious and shrewd and wants to move faster than the clock. ‘He approved it. His personal payout was US$500,000.’

Human beings have their frailties, some more common and general than others. Politicians may take corruption to a whole new national level where one deal can make a man rich via his ‘enhancement’ under the table. Because of the power they yield and the fear they generate among potential whistleblowers, even systemic governmental corruption is accepted as the norm among many sectors of society.

‘It’s the penalty we pay for lying in bed with the snakes we created,’ said a well known businessman and acquaintance with significant holdings and personal wealth.

We have constantly asked ourselves why would a person with an in-demand profession who can earn J$9 million in a bad year want to answer the call to ‘serve’ by becoming a constituency representative.

I am certain that there are some Jamaicans who believe they have a constructive role to play in political leadership and the development of our people. They I believe are the few. Perversely I accept that there will be corruption especially at cabinet level. But it is rife at Parish Council level. And even that we accept with a shrug and declare, ‘They can’t help themselves. They are politicians.’

That said it is rare that persons from a political party leak a document giving some details of how certain members of the PNP collected funds from senior private sector individuals/companies but much of the funds did not end up in the coffers of the PNP.

Certainly the PNP is wallowing beside the pigs. It is not a secret that more than a little scamming of party funds collected during election campaigns will occur. In the report it appears that a private sector eager to see the return of the PNP to power went out on a limb to shower the PNP with cash.

And before it made its way to PNP party central, it stepped on the brakes, engaged reverse and eventually fattened the pockets of those who directly collected. As a man outside a little two-stooler said to me yesterday, ‘When dem si di whole heap a money dem figet bout election and start to eat di food.’

From this shame the PNP must openly apologise and do penance. It must give up any hope of seriously contesting the next general elections. It needs time well beyond the next elections to recover from this shame and infamy. The party needs a makeover.

Opposition Leader Portia Simpson has summoned the worst of the gods of discord by complaining that real comrades do not divulge party information to the public.

Is she serious? Surely she cannot be headed to any rational path by adopting this approach in the face of what has been revealed. In her display of petulance and borderline rage, the PNP Opposition Leader has once again exposed her most glaring fault. The inability to learn from the past, the refusal to move with the times and the belief that she is always the victim and, a free pass is her entitlement.

Here is that a scandal which will easily dwarf any ones to come. In terms of the low-life, village-thief behaviour exhibited by a handful of PNP operatives willing to fit in with the role of scavengers but this time turning in on itself and cannibalizing its own, this scandal makes the Operation Pride, Trafigura, Manatt, Dudus extradition ones pale into insignificance. 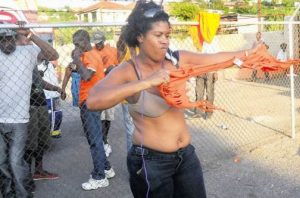 The truth is, what was revealed was the battered soul of a soulless party. A party with no direction and integrity at the barest fundamental level or, at the very least, one who would sell us misdirection as policy. Where is that person who is prepared to step up to a podium and declare, ‘We must have order. Before that we must demonstrate that we are trustworthy and only then can we ask the people to follow our guidance.’

There is a shark, a most vicious predator which has no compunction in attacking its own. Sometimes during a violent fight the shark may become close to mortally wounded where it has its entrails hanging outside it. The shark will gaze at its own entrails and begin to ravenously devour it.

Same thing the PNP has done. Shame, shame, shame on you. Fooling up private sector leaders, scamming your own party and selling the nation your mud pit of a soul.

One thought on “WIGNALL SEH PNP A SCAVENGE ITSELF”