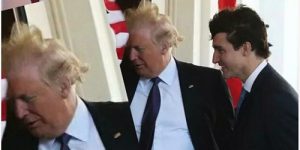 Get your covens ready.

Protest may be the new brunch, but witches are joining together worldwide in a more magical form of resistance to cast a spell on President Donald Trump, reports say.

A document circling the internet in both private and public witchcraft groups contains a spell to bind Trump to all who abet him, and even muggles (non-magic folks for those unfamiliar with Harry Potter) are encouraged to participate.

The binding ritual is to be performed monthly by those who practice the craft until Trump is removed from office.

The mass spell is to be performed on every waning crescent moon at the stroke of midnight EST in order for it to work.

The first spell cast event is set to occur on Friday, Feb. 24. Similar events are anticipated to follow on March 26, April 24, May 23, etc.

Until Trump is out office, that is.

As some may have already expected, reports say that some Evangelical Trump supporters hip to the witches’ plans are prepping to pray en masse Friday night to zero out the spell’s effects.

For those who ask if it will work, there is only one way to find out. Luckily, we’ve got the supplies and instructions for you below.

After, arrange the remaining items in a circle, leaning the tarot card onto something so that it stands vertically.

Then you can start reciting the banishing ritual, which includes lines like:

Hear me, oh spirits
Of Water, Earth, Fire, and Air
Heavenly hosts
Demons of the infernal realms
And spirits of the ancestors

I call upon you
To bind
Donald J. Trump
So that he may fail utterly
That he may do no harm
To any human soul
Nor any tree
Animal
Rock
Stream
or Sea

Bind him so that he shall not break our polity
Usurp our liberty
Or fill our minds with hate, confusion, fear, or despair
And bind, too,
All those who enable his wickedness
And those whose mouths speak his poisonous lies

I beseech thee, spirits, bind all of them
As with chains of iron
Bind their malicious tongues
Strike down their towers of vanity

I beseech thee in my name
(Say your full name)
In the name of all who walk
Crawl, swim, or fly
Of all the trees, the forests,
Streams, deserts,
Rivers and seas
In the name of Justice
And Liberty
And Love
And Equality
And Peace