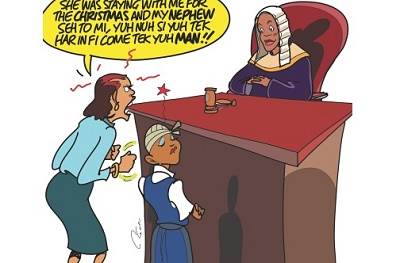 A woman appeared in the Corporate Area Resident Magistrate’s Court last week for assaulting a schoolgirl whom she accused of having an affair with her lover.

The court heard that 30-year-old Kedisa Davis of Ascot Avenue in Kingston used her phone to hit the 18-year-old sixth form student in her forehead, causing swelling and bruises. The complainant, in her statement, also reported that Davis kicked her after she fell.

On Monday when the matter was heard, Davis pleaded guilty to assault occasioning bodily harm and was ordered to pay $20,000 or serve six months.

Before she was sentenced, Davis told the court that the complainant came to her house and not only disrespected her but tried to seduce her lover.

“She seh she nah go home and tell mi to move mi wats-it-not, and so mi start fight,” Davis added.

Senior Resident Magistrate Judith Pusey then said: “You start to fight with her, but you are almost twice her age and you hit her because of that?”

Davis replied: “Your Honour, mek mi tell you what happen. She was staying with me for the Christmas and my nephew seh to mi, ‘yuh nuh si yuh tek har in fi come tek yuh man’.”

“Your Honour, mi nuh know how she know it, but she know the sound of his (Davis’s lover’s) vehicle. If him deh a Negril, she hear him a come and run go on the verandah go sit down and spread her legs, and mi seh to her, ‘mi a watch yuh’,” Davis said.

The magistrate then asked the complainant, who was dressed in her school uniform: “You were interested in her boyfriend?”

“No, I was not,” the complainant answered.

The complainant replied that she and Davis’s lover only exchanged greetings such as ‘good morning’ and ‘good afternoon’.

But Davis continued her story, saying, “In December we went out and my boyfriend asked for fare, she a go seh to mi, weh yuh fare deh. When him ask weh mi want fi eat, I said burger, and she seh mi chest too high.”

However, the magistrate told Davis: “You need to cut the drama. You just wanted an opportunity to lend it to her because you were jealous, but not all girls are up to these things.”

The magistrate then warned the complainant not to go back to the house and ordered Davis to pay the $20,000.

According to the complainant’s statement, on February 2, about 6:40 she went to look for Davis’s niece and then followed her to deliver something to Davis, who was on premises elsewhere in the community playing dominoes.

Davis, upon seeing the complainant, asked her why she was visiting her niece so late as she knew that people wanted to kill her, and got up from around the table.

The complainant said while she and a friend were leaving the premises, she overheard Davis telling her niece that her (the niece’s) ex-boyfriend called her and told her that she and the complainant were having sex and that the complainant was also sleeping with Davis’s lover.

The complainant said she was rescued by people who pulled Davis away from her.

A man appeared before the court after he allegedly used a hammer, in a jealous rage, to beat his wife.

The accused, Lauriston Williams, 56, of Olympic Way in Kingston, reportedly became jealous and angry after his wife left home to pick up a uniform from a tailor.

The court was told that on February 15, about 9:30 pm, Williams called his wife on her cellular phone while she was at the tailor, verbally abused her and accused her of turning off her phone.

The complainant, the court heard, went home and was reportedly confronted by her husband. She told him that she was not a child and therefore was not in need of parental guidance.

The accused reportedly got angry and told the complainant to pack her things and go live with the tailor.

The complainant then reportedly told her husband that if he touched her eyelash he would see something.

The court was told that Williams then pulled a gun and threatened to kill his wife, who at that point, left the house, but returned shortly after.

Williams reportedly started quarrelling with the complainant and used a hammer to hit her about six times in her back after her cellular phone fell from her and she stooped to retrieve it.

It is further reported that Williams then pulled his firearm on the complainant, upon which she ran from the house and later reported the matter.

Williams was charged with unlawful wounding and with breaches of the Firearm Act.

On Wednesday when the matter was mentioned in court, the complainant said that Williams was giving her a lot of problems, was very abusive and that he had used the hammer to beat her all over her body.

But Williams told the court that he was the one who was being abused.

“This is a rambunctious and very notorious lady!” Williams said aloud.

“She is known to run for a lot of cutting tools. If I wasn’t a trained man I would be in my grave,” he said further. “I have had to defend myself against cutlass, and had to use a chair to knock it out of her hands.”

Willams also said: “I went to the Family Court and told them that I was in danger of losing my life, but she continued.”

The matter was rescheduled for mention on May 8 and Williams’s bail was extended.

Man claims he is haunted by ‘duppy’

A man who reportedly used a machete to chop his aunt’s door was remanded for psychiatric evaluation after he blamed his actions on a “duppy”.

The accused, Adrian Evans of Point Hill, Lawrence Tavern in St Andrew, was reportedly arrested and charged with malicious destruction of property on April 17, following allegations that he went to his aunt’s home while she was at a funeral and chopped up the door to the house.

Evans, however, told the court on Friday that he was influenced by “duppy”, who was plaguing him.

“Mi mother and mi father set duppy on mi and through de duppy mi mash up de door,” he said.

Consequently RM Judith Pusey made the decision to remand him for psychiatric evaluation.

“I am going to send you to the doctor so you can get rid of the duppy,” RM Pusey told Evans.

He is scheduled to return to court on May 22.

Beaten for his ‘smelly feet’

A man was ordered to pay a fine of $35,000 of serve six months in prison after he told the court that he used a lug tool to hit his co-worker in the face during a dispute over his “smelly feet”.

Marlon Chang, 40, maintenance worker of Barbican Road in Kingston, was fined by RM Judith Pusey after he pleaded guilty to assault occasioning bodily harm on Monday.

Chang, in his explanation to the court, said: “He had on a shoes that smell bad and we work at a place where people have to come into the place.”

Chang’s account of the incident, however, differed from that of the complainant, who was not present in court.

According to the complainant’s statement, on February 26 about 6:00 pm he and Chang were travelling in the company’s vehicle when Chang started to tease him while making derogatory comments.

The complainant subsequently reported the matter and Chang was arrested and charged.

A woman who threw a cup of hot porridge on her neighbour, claiming he shoved her son to the ground and gave her “feisty chat” was fined $30,000 after spending more than a week in jail.

Daheima Porter had pleaded guilty to assault occasioning grievous bodily harm on April 7 and was remanded for sentencing on the following Monday. But on Monday when the matter resumed, RM Judith Pusey told Porter that she needed more time to think about her sentence and remanded her until Friday.

Porter, in her first appearance, claimed she attacked the complainant after he assaulted her son and disrespected her.

“We talk and talk and him come out an a give mi feisty chat and mi throw it pon him,” she had said.

She had told the magistrate that the complainant had been making her life miserable.

“Him always a trouble mi; mi cyaan go round a de back of the house, mi cyaan use the toilet and nobody cyaan go inna de mango tree,” she had claimed. “Me tiad a him, him tek a set pon mi,” Porter added.

On Friday when she appeared for sentencing her lawyer, Ester Reid, told the court that she was provoked by the complainant who had been terrorising her.

Porter was then ordered to pay $30,000 or serve six months in prison. Reid however begged the magistrate to reduce the amount, but Pusey refused.