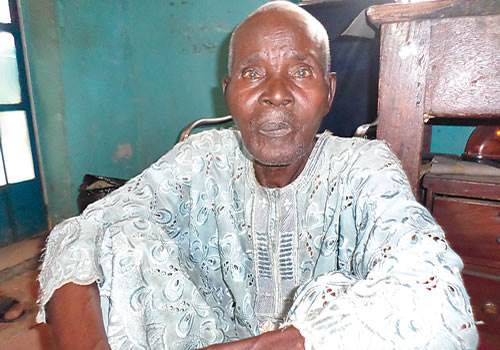 Says ‘I only slept with her twice’
THE Yoruba proverb which says that one does not need a complete set of teeth to break a hard bone, once the few ones present in the mouth can do the job, aptly describes Pa Muse Alabi both literally and metaphorically. Most of the teeth of the 75-year-old man are missing. This has made the front and the two sides of the laughter chamber to cave in. But Pa Alabi is still going strong in meat consumption – both animal and human.
He is not a cannibal as some readers must have quickly assumed. He is simply a lady’s man and goes for young or old, single or married. However, he has bitten more than he could chew as he is currently at the State Criminal Investigation Department of the Oyo State Police Command, where the anti-social behaviour unit is investigating a case of defilement of a 13-year-old girl (name withheld) allegedly committed by the old man, and which has resulted in pregnancy.
Crime Reports learnt that Pa Alabi was doing carpentry work for a lady under whom the victim was an apprentice. The young girl seized the opportunity to tell Pa Alabi to build a safe for her. After giving her the safe, Pa Alabi wooed the girl and she agreed to his proposal. After the first sexual intercourse they had, it was learnt that the suspect gave the girl N200. When she also demanded for a handset, he gave her N1,500 to buy i-tel phone.
Four days after, they made love again. Both times were in September this year. But the grandmother of the girl was said to have noticed recently that she was showing signs of pregnancy. Though she denied, she secretly went to her lover to inform him. To her surprise, Pa Alabi demanded to know how she could be pregnant since he only had sex with her twice.
The girl decided to keep to herself and would not talk to Pa Alabi whenever he went to her mistress’s shop. This was said to have prompted the man to inform the mistress that her apprentice was pregnant for him, warning against the abortion of his unborn child. Shocked, the mistress informed the girl’s grandmother who, in turn, told the girl’s mother. Eventually, word got to the girl’s elder sister who went to a police station on Saturday, November 15 to lodge a complaint and Pa Alabi was promptly arrested.
A police source informed Crime Reports that the suspect’s neighbours said it was in the old man’s character to go after under-aged girls. The ultrasound scan carried out revealed the expected delivery date of the girl as July 7, 2015 meaning she is two months pregnant. Strangely, the girl was reported to have never menstruated before the pregnancy.
In an interview with Crime Reports, Pa Alabi admitted having sex with the girl and the paternity of the baby. He also agreed to marry her and take care of her and the baby when born. According to the man who lives at his family house at Oje area, “I am a carpenter and I still work till the present time. I even take roofing jobs. I am very strong.
“I have two daughters and a son. My first wife gave birth to the female children but had to be taken away by her people when she developed mental illness. My second wife is the mother of the boy who is an SSS3 student but she has left for another man. Currently, I have no wife.”
So how does he satisfy his sexual needs when it looks as if he is very active? Crime Reports asked. Pa Alabi replied: “I don’t go looking for any woman. I usually have sex with any of the married women who like me and come to me for sex. This is not always though.”
Speaking on how he came in contact with his victim, the elderly man said: “I used to do carpentry work for her boss who sells tailoring materials. That was where I knew her. One day, she asked me to help her build a safe in which she could be keeping her money. When I finished it, I asked her to come to my shop for the safe late one evening and I gave it to her.
“She used to pass by my shop whenever she was going home and used to stop by to greet me. On a particular day, I expressed my interest in her and she promised to think about it. She later consented and on one of the days she stopped to say hello to me, we had sex when I had an urge. And it was mutual. About five days after the first time, we had sex again and she stopped coming.
“One day, she came to me and told me that her grandmother said she was pregnant. She stopped coming again and I didn’t see her again until policemen came to arrest me.”
When asked whether he knew that his action was in contravention of the law, Pa Muse replied that he didn’t know, describing the outcome of his relationship with the young girl as “an act of God”. He said: “Mistake has no master. I pray that God should forgive me.”
The suspect said he doesn’t use any sex performance enhancement drug before making love to a female. “I don’t take any herbal drink for enhancement of sexual performance. They are alcoholic and I don’t take alcohol as a good Muslim. I observe my five-times-daily prayers faithfully.”
Pa Alabi said he was ready to take responsibility over the pregnant girl and the baby she is expecting. “I can take care of her adequately. I have a nephew who is a medical doctor and he has promised to help too,” he stated.
The Police Public Relations Officer, Olabisi Okuwobi-Ilobanafor however said that the suspect would be charged to court.

0 thoughts on “WTF AFRICA-75 YEAR OLD GETS 13 YEAR OLD PREGNANT, SAYS THEY ONLY DI IT TWICE”