WTF AFRICA- ADULTERY WITH A TWIST 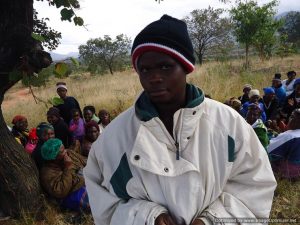 THE Sahumani adultery in which a married woman confessed to have eaten the forbidden fruits with three different men took a new twist after the woman was assaulted by one of her “clients” wife.
Word reaching The Weekender revealed that the adulterer, Monica Dumbura, got a bashing from Mateo Bhobho’s wife, Naume Mashanu.
The case was also brought before Headman Sahumani who fined Mashanu a goat and a bucket of rapoko (njera).
Dumbura left Sahumani villagers speechless after she confessed to have unrepentantly slept with former MDC-T councillor Aaron Kamhungira, his brother Zekias Kamhungira and distant cousin Mateo Bhobho.
In a no-holds-barred confession she left no detail unmentioned: “Ini ndinoda kuti abvume zvaakaita. Ini ndataura chokwadi changu. Iye (Zekias Kamhungira) ngaabvumewo, anozviziva. Ini akandidaro kanopfuura ka seven…ngaataure kana achiziva rungani kana zvakapfuura ipapo.” (He had sex with me more than seven times unless he knows how many more times. Let him tell the truth and shame the devil. He knows what we did and must own up to the truth),” embattled Monica confessed before more than 200 Sahumani villagers who had come to witness the mother of adultery hearings in this rural community.
Handing down judgment on the three accused, Headman Sahumani said the evidence before him was overwhelming.
“I find all three accused guilty. You have the right to appeal to higher courts, proceed to the Supreme Court if you like. That is allowed. But you have 30 days to do so. If you are not satisfied with my ruling, you have that right. I have nothing to lose should my ruling be overturned by a senior court. Otherwise that is that. Each one of you must pay the man whose marriage you defiled a cow and a goat as demanded by the offended – or $400 cash each.
Headman Sahumani, however, asked Mazhakata to consider demanding lighter restitution from Bhobho Mateo who had confessed to bedding his wife on several occasions.
Headman Sahumani warned married women to be very careful.
“Be satisfied with your men and marriages. Men, too, please never take advantage of foolish women. Some women cannot keep their things shut. They give anybody who asks. Do you then take advantage? No! Please hear me! Any man who chooses to defile my village this way – through breaching taboos and committing abominations, I have no fear or favour. You will all face the music.”
He directly condemned Monica’s actions and called her a shameless nymphomaniac. “You are sick, woman! You need help from elderly mothers. They can cure you of this demonic appetite for men,” concluded the headman, cautioning Aaron Kamhungira’s wife who was threatening to ‘kill’ Monica. ” I don’t want to hear that anyone has beaten up this woman. If you do you will come back into this court and I will deal with you.”
Naume Mashanu (26), Bhobho’s wife, also angrily charged: “At least my husband and Monica could have respected that I was in hospital with my baby who was languishing with burn wounds at the time. Meanwhile, they were enjoying each other.”
Another community member, who requested to comment on condition of anonymity, gave remarks of concern for the families involved: “If one of these people is HIV positive, what happens? This is a shameful story in our community (of course), but perhaps the days of reckoning are ahead when one by one all of them succumb to the AIDS pandemic.”
Simba Ndadyei (36), another villager on his way to church who had decided to make a detour to witness this much-talked-about case of adultery, said men must never take advantage of people’s wives no matter how loose those wives may be.” Don’t take advantage! Loose morals do not give adulterers licence to exploit them. Some of these women are mental and spiritual cases. As a man, stand your ground and control yourself,” said Ndadyei. And these primary courts must impose stiffer penalties to deter would-be-offenders.
Paul Sahumani (61), a councillor in Sahumani ward, said nothing could be more shameful. “This revelation has brought unspeakable shame to our community. Vatinyadzisa vanhu ava. Women must also guide and counsel each other,” he said.
Pockets of women, possibly fearing for their own husbands, called for Monica’s excommunication. Some called for banishment from Sahumani. Others advised that Tendai Mazhakata, the wronged party, must send Monica packing back to her parents’ home. Many were simply too dumbfounded to speak.
The words of the village head to Monica’s husband warning him to make sure he was not making money through his sexually overcharged wife, were not only humbling.
He triggered a strong wave of FOOD FOR THOUGHT for those who were listening to the court proceedings. End of story.
The question that remains on everybody’s mind is: “Does the Sahumani saga portend the next generation of adultery? A question only social commentators would find easy to answer!

0 thoughts on “WTF AFRICA- ADULTERY WITH A TWIST”