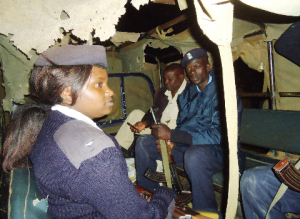 Thursday night marked the proverbial 40th day for an Assistant Chief from Kaveta Sub-Location, Kitui Central District after he was caught with relief food hidden in his toilet.
The rice, which was donated by the Government to be distributed to the poor, was found in a pit latrine at Cosmas Syumuti’s home.
Kitui Central police boss, Kennedy Onsando, said that they arrested Syumuti in Syungila-Nguluuni village following a tip off from members of the public.
He stole bags of rice while they were being distributed to residents at Syungila Chief’s Camp earlier that day though he claims that he was given to keep it by the chief.
Onsando added that after stealing, he hired boda boda operators to take it to his home but after realizing that he had been spotted, he dumped the rice in his toilet to conceal evidence.
He will be charged for theft.