The Ojo Oba/ Mapo Grade C Customary Court listened to the suit brought before it by a carpenter, Isiaka Alabi, seeking the dissolution of his 25-year-old marriage to his wife, Adeola, a trader. 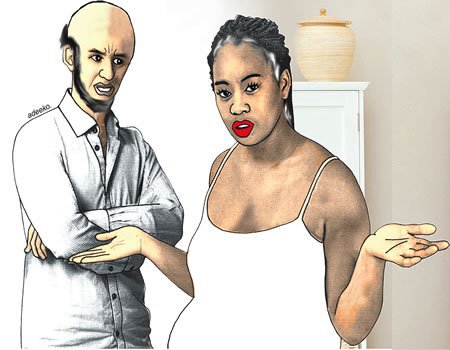 Isiaka is seeking divorce on the premise that his wife abandoned her home, neglected her duties as wife and mother and went after politicians. He also stated that she denied him s*x and was always fighting him.

He, therefore, prayed the court to dissolve their marriage and grant him custody of their six children.

The defendant disagreed to her husband’s plea for divorce. Her reason among others was that she was carrying their baby. But the plaintiff denied being responsible for the pregnancy.

According to him, the last time his wife allowed him to make love to her was four years ago.

“I got married to my wife 25 years ago and like any other marriage, it had experienced its ups and downs, but we kept moving on, believing that things would end well.

“Our relationship suddenly turned sour four years ago when my wife started going after politicians.

“She would abandon the home sometimes for three days and attend political functions.

“She totally jesttioned her roles as wife and mother. She neglected me and the children and wasn’t just bothered about our welfare. Anytime I complained, she would turn it into a fight, the plaintiff stated.

“The rift between us deepened when she started refusing me s*x. She told me to my face that we no longer belonged to the same class. I needed no one to tell me she was dating other men.

“I reported her to her relatives and mine. They spoke to her but she was adamant. She denied me s*x for four years. She later moved her things into her shop five months ago and started living there.

“I was surprised to see her with pregnancy last year December, and I called my relatives’ attention to it. When she was asked who impregnated her, she lied that I was the one,” the plaintiff said.

“My husband is the father of the child I’m carrying, “the defendant insisted in court.

“He said I was going after politicians. Why wouldn’t I, if I could get money from them to take care of myself and the children? He is a failure as a husband and father. He is a carpenter but all he did was to incur debt because he was not good on the job. We ate from hand to mouth in the 25 years of our marriage, while his relatives had come to our rescue on many occasions, giving us money and foodstuffs.

“It is true we didn’t have s*x for a while, but one night last year August, I went to his room and slept there. We made love throughout the night. He enjoyed it and was happy.. I took in after that, but he has denied sleeping with me.

“He is a liar, he owns the pregnancy.

“I moved into my shop this January and not last year, “she stated.

The court president, Chief Ademola Odunade, called on witnesses of both parties to testify.

According to her, the rift in their marriage was basically hinged on s*x.

“Adeola is troublesome and was always fighting her husband. Things got worse when she abandoned her home and started going after politicians. She started disregarding her husband and went as far as denying him s*x. I tried to call her to order, but she turned deaf ears to me.

“I was stunned when I learnt she was pregnant because she never told me she had started sleeping with her husband. Her husband too never told me anything of such.

“It was actually her husband who informed me that she is with a baby.. The shameful thing is that she and her first child are both pregnant. Her daughter was impregnated by someone we do not know. She took her daughter away from home to a place her husband and other family members do not know till date.

“She started sleeping in her shop in December and not January as she had stated, “the witness said.

The second witness, Yunisa Oladapo, confirmed all that the first witness had said and added that the defendant, before moving into the shop moved her husband’s belongings to the sitting room and locked up the two bedrooms..He sad that since then, the plaintiff had been sleeping in the sitting room.

After listening to all the parties, the court president, Chief Ademola Odunade observed that the couple’s relationship had broken down irretrievably.

Giving his judgment, he ruled that the marriage be dissolved and granted custody of first five children to the plaintiff, and the last to the defendant.

The plaintiff was asked to pay N3,000 monthly as the last child’s food allowance and be responsible for his education.

The plaintiff was also ordered to rent an accommodation for the defendant at the rate of N1,000 per month for a year.