A man, Akeem Babalola, has asked an Agege Customary Court in Lagos State, to end his eight-year-old marriage to his wife, Olufunke over irreconcilable differences and abandonment. 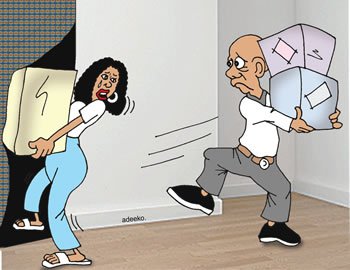 The petitioner told the court that his estranged wife, who is a hairdresser valued her business more than her family.

The father of three lamented that his wife spent better part of her time in her shop.

“I have been hearing different information that she entertains difffferent men in her shop. I cautioned her about coming home late and her association with different men. I was shocked when she started raining insults on me, calling me a useless man in the presence of our children. I felt bad and walked away, only for me to return home and find out that she had packed some of her things and moved to her shop,” he said.

He added that efforts to get his wife to come back home was unsuccessful as she was bent on her ways.

“She abandoned the children, even the youngest one who is just over a year. I had to abandon my business so that I can take care of the children. I was surprised when one of her aunties came to tell me that she had moved to her lover’s house.

“I reported the matter to her family who called for a meeting but she did not show up. The children are currently with my mother until I can rally around again and raise some money in order to be able to take better care of them,” he said.

His estranged wife was, however, absent in court. The President of the Court, Chief R. Williams adjourned the matter till October 19 for continuation of trial.