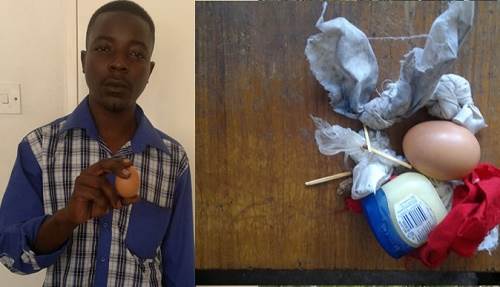 A 27-year-old Chitungwiza man today caused a stir at the town’s magistrate’s court after he was caught red-handed performing rituals at the premises’ gate with officials linking it to the death of the resident magistrate.

Lovemore Jochoma pleaded guilty to charges of engaging in practices commonly associated with witchcraft when he appeared before Chitungwiza magistrate Mr Lazarus Murendo.

He was sentenced to 12 months in prion with three months suspended for five years. The remaining nine months shall be effective.

They described the act as bizarre following the mysterious death of resident magistrate Mr Kudakwashe Stewart Jarabini who died on Wednesday last week.

Lovemore Jochoma of Unit G in the satellite town barred it all before the court officials that he wanted to smash the egg as part of his rituals.

“I brought this egg which was meant for the prosecutor who is dealing with my case of domestic violence,” he said.

This follows yet a similar incident on Tuesday at around 6.30am when an alert security guard at the court identified as Ephraim Tshuma saw him smashing another egg and took to his heels.

Jochoma today ran out of luck when he was tracked and caught red-handed by Tshuma before performing his rituals.

He was hauled inside to the police post at the court where he narrated how he ended up performing the rituals.

“I went to an apostolic sect known (Nguo Tsvuku) where I was informed by a female prophetess (Madzimai) that I have evil spirits tormenting me.

“She then told me to perform these rituals so that it would help me set free,” he said.

Upon being searched, Jochoma was found in possession of concoctions in white and red clothes.

On Tuesday, officials at the court woke up to witness a horrific suspected witchcraft scene.

And in a courtroom were some pebbles used as holy stones in apostolic churches found strewn in the gallery.

As a result of the incident, they resorted to sprinkling coarse salt in the passage and some court rooms.

Yesterday’s incident would be the third time these rituals had been conducted.

Hardly a week after the mysterious death of Mr Jarabini, rumors are rife that he also faced some challenges after the occurrence of the same act.

“The late Mr Jarabini was forced to move to another court room after citing an anomaly in his usual courtroom after failing to grasp anything during a trial.

“He had to adjourn the court to sit in another courtroom and on the following day.

“Ironically, this is now synonym with witchcraft for the late Mr Jarabini started having complications after the same incident occurred,” said the source.

Court officials have since appealed for the responsible authorities to help them solve the situation.

“We are now living in fear for what is happening here is totally the work of the devil. The responsible authorities should conduct a cleansing ceremony of the court since what is before us is worrisome.

“How possible is that we can wake to see such things at the entrance to this premise in consecutive weeks?” asked one of the employees.

Jochoma pleaded guilty to charges of engaging in practices commonly associated with witchcraft when he appeared before Chitungwiza magistrate Mr Lazarus Murendo.

He was sentenced to 12 months in prion with three months suspended for five years. The remaining nine months shall be effective.