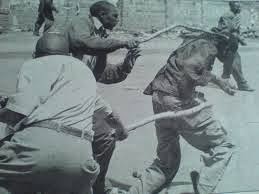 Activities at the busy Misikhu market in Bungoma County came to a standstill on Tuesday after angry residents, mainly men, demonstrated against one pastor who was snatching their wives.
Led by Dan Wafula, the latest victim, they marched up to the pastor’s house and set it on fire. Police who were acting on a tip off from some locals however responded fast and prevented more tragedy.
Speaking to the media, Wafula said that the pastor had always insisted on praying for women and in the process had sex with them. Many of the men have been left single by the wives who pitch camp at the pastor’s home for fasting and prayer sessions.
Wafula added that since his wife started visiting the man of God, their marriage has had challenges because he does not get his conjugal rights, there is no one to prepare his meals and they are in a financial crisis since the wife ‘sows seeds’ with all the money.
The men vowed to deal ruthlessly with the pastor if he ever sets foot in the area again.