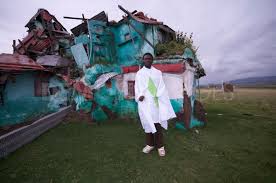 A 40-year-old self-confessed prostitute Selina Sachinda reportedly claimed that she helped a prophet fake miracles.
Madzibaba Enoch (real name Hebert Senda), was accused conniving with six others to pay prostitutes to work as their agents so they can confirm their “false” prophecies in a bid to increase the numbers at their churches.
Sachinda said she was one of the agents of the prophets who paid people anything between $10 and $20 for them to undress during their church services after confirming that they are prostitutes or witches.
In an interview with the Weekend Post Madzibaba Enoch claimed that the other six were prophets he had ordained at his shrine but were now envious of his church after they failed to attract crowds at their shrines.
“People are not happy that our congregation has grown up to this size after they left hoping to start their own shrines. We realised that the people who are saying I am fake came from this place and because they failed in their endeavours, they want to tarnish my image,” said Enoch.
He said his church was bound by values of Christianity which emphasise upholding moral values and that it attracted respectable who include traditional chiefs.
“We have people who are respectable in society whom we fellowship with including Chief Negomo and his wife who is here right now. There is no way what is said to be obtaining at this sacred shrine could occur under the chief’s nose unless you are saying he is complicit,” he said.
Enoch added that his church which he claims has millions of congregants both locally and in the region was mooting a partnership with Harare Hospital to establish a cancer treatment centre at the shrine.
“All we are waiting for is finalisation of our dispute with Harare City Council over the area we are occupying which they say is theirs when we know that it belongs to ward 24 Zvimba East constituency,” said Enoch.