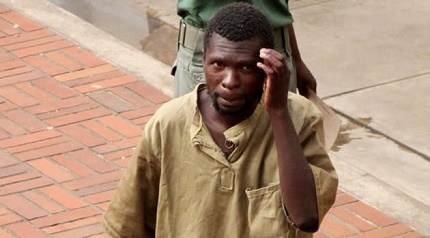 A Bulawayo man who earlier this year asked to be castrated after being sentenced to 20 years imprisonment for rape, yesterday forced the adjournment of his other rape trial when he dropped his trousers in court feigning mental instability.

Regional magistrate Trynos Hutahwashe remanded Xolisani Nkala to May 30, and ordered that he be examined by three doctors.

30-year-old Nkala forced most women in the gallery to look away as his trousers dropped to reveal his manhood.

However, according to medical reports produced by Hutahwashe yesterday, Nkala was previously certified fit and mentally stable by doctors.

Hutahwashe said Nkala should be examined again after his latest actions in court.

Prosecutor, Robin Mukura told the court that sometime on January 2 this year at around 16:30PM the complainant met Nkala and told him she was selling herbs and he expressed interest in buying them.

He paid $70 for the herbs worth $103 and then asked the complainant to escort him to Ntabazinduna to collect the balance.

After disembarking, the two walked for about 200 metres on a foot path and Nkala then dragged the complainant into a nearby bush.

He allegedly started beating her up with open hands.

Nkala allegedly ordered the complainant to remove all her clothes while threatening to kill her.

He then raped her twice using a condom and threatened to kill her if she reported the rape to anyone.

Earlier this year, Nkala begged the magistrate to castrate him after being sentenced to an effective 20 years in prison for another rape and robbery case.

In that case, Nkala used the same modus operandi to rape and rob his victim after taking her to Ntabazinduna.