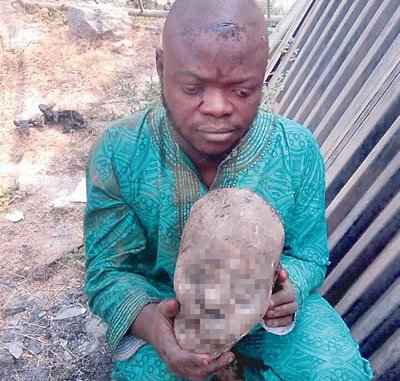 As many Christian worshippers were preparing to go to their places of worship in the early hours of Sunday, pandemonium broke out in Olomi area of Ibadan, Oyo State, when a man, Saheed Musiliu, was caught with a human head.

The man was reportedly caught with the head of a corpse he exhumed at the back of Basic Community Primary School in the area.

Metro learnt that policemen from Sanyo Division of Oyo State Police Command were alerted at about 6:00a.m. by a member of the public when the suspect was noticed by community members.

But events took a new turn when the police arrived at the scene, as hoodlums refused to allow them take the suspect away, saying that they should be allowed to carry out jungle justice on him.

In the ensuing melee, the hoodlums reportedly attacked the police patrol team that came, vandalising its patrol van in the process.

They also made bonfires as they insisted on taking the suspect from the police, making vehicles and passersby to make a detour from the area to prevent being caught in the midst of the chaos.

They were said to have attempted to burn the police van with the policemen in it, making the patrol team to quickly leave the scene.

However, the hoodlums again barricaded the two gates leading to the community to prevent the policemen from leaving until reinforcement was sent to join the team.

When interrogated by the police, Musiliu confessed to have exhumed a corpse and cut its head, saying it was meant for sale to those who intended to carry out money ritual.

He also disclosed that he had sold two human parts to those who needed them in the past.

Meanwhile 27 suspected hoodlums have been arrested by the Oyo State Police Command while the suspect with human head had been taken into the custody at the State Criminal Investigation and Intelligence Department, Iyaganku, Ibadan.

Disclosing this to Metro on Sunday, when contacted, the state Police Public Relations Officer, Adekunle Ajisebutu, said that the hoodlums attacked the police for not allowing them to take laws into their hands.

He also said that the human head found with the suspect had been recovered as exhibit, adding that the suspect and the 27 hoodlums were being interrogated at the SCIID.

One thought on “WTF AFRICA- RITUALIST FOUND WITH HUMAN HEAD”