A Mapo Customary Court in Ibadan, Oyo State, on Friday dissolved a 12-year-old marriage between Sekinat and her husband, Raufu Abdulakeem. 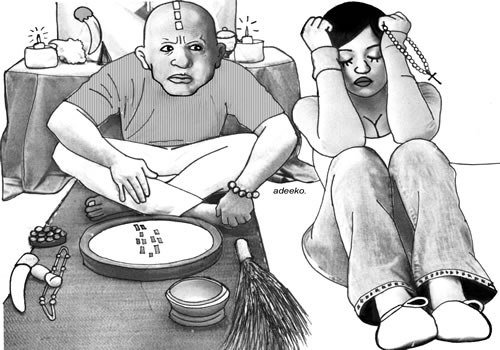 Sekinat had accused the husband of trying to use their 11-year-old child for ritual.

Mr Ademola Odunade, the President of the court said it was the couple’s decision to part ways.

He awarded custody of the two children produced by the union to Sekinat for proper care.

The arbitrator directed Raufu to pay a monthly feeding allowance of N3,000 for the upkeep of each of their two children, and also take care of their education and welfare.

Earlier, in her petition before the court, Sekinat alleged that the husband has sent her out of their house in order to offer their 11-year-old child for sacrifice.

“My lord, after Raufu had sent me packing from his home more than a year ago, I came across our 11-year-old first child recently and I saw multiple razor mutilations all over his body.

“It was a gory site to behold, and I immediately became apprehensive of what my two children were undergoing in my absence with Raufu.

“Then, the child told me that his father, Raufu took him to a ritualist who compelled him to carry some sacrificial objects at 1am, after designing his body parts with razor mutilations.

“The boy further said that his father, Raufu had alleged that he was trying to prevent him from further stealing and that was the reason for the sacrifice.

“My lord, the fundamental question at this point is that Raufu is an Alfa with strong Islamic background, what is his association with a herbalist, and making a child at that tender age to undergo such a midnight exercise.

“Before sending me out of his house, Raufu had subjected me to such dehumanising experiences such as regular battery and inadequate care for the two children and I.

“I have all along been responsible for the welfare of the children and I want to have custody of all the children because he might use them for ritual,” Sekinat stated.

Raufu, however, denied any attempt to sacrifice the child, saying he took the child to the herbalist to cure him of stealing habits.

“My lord, he is my son, I cannot use him for anything negative, but to take care of his spiritual deficiency,” Raufu said.