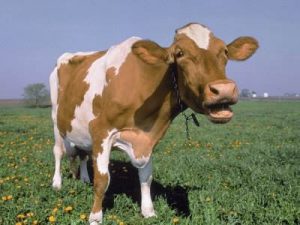 Calf born with dog ears’ relatives allege witchcraft
22-year-old Gugulethu Ndlovu from Bulilima, Plumtree, Zimbabwe, was shot dead and her grandmother, Thokozile Sola, 60 wounded by a mysterious gunman.
The mystery shooter also torched their homestead in Masendu Village and proceeded to two other homesteads belonging to members of their extended family.
Investigations by the area’s traditional leaders have suggested that Sola was the main target in the incident.
“It appears that there was a plot by Sola’s relatives to punish her for alleged witchcraft.
“Sola’s relatives especially her in-laws are convinced that she has been bewitching them with the help of her close relatives.
“A mysterious thing is reported to have happened some years back within the family. A cow gave birth to a calf with dog ears.
“They have attributed this strange happening to Sola’s doing as well as the mysterious death of certain close family members including the death of Sola’s husband,” said Freeman Dube, Chief Masendu’s secretary.
He added that police have been questioning some of Sola’s relatives in connection with the shooting.
“Although Sola’s relatives are not coming out in the open as to who could have initiated and carried out the attack they have hinted having talks to resolve the issue of witchcraft within their family.
“They have said Sola and some of her close relatives from the area have been blamed for making the lives of Sola’s in-laws miserable,” he added.
Sola survived the attack which occurred early this month after being shot on the right arm, but her granddaughter Ndlovu died leaving her two-year-old-son behind.
An unidentified gunman who is suspected to have been in the company of two other people torched a hut in which Sola and her six grandchildren were sleeping in and stood guard at the door.
Ndlovu was shot while trying to flee from the burning hut.
The assailants were travelling in an unidentified vehicle.
Sola later escaped from the burning hut with her five other grandchildren aged 12, 10, five, two and one and sought refuge at her sister’s homestead.
The gunman later torched a hut where Sola’s niece and her husband were sleeping in but the two managed to escape unharmed.
The gunman is suspected to have first torched a homestead belonging to Sola’s sister who lives in Dombodema area which was empty before proceeding to Sola’s homestead.
Officer commanding Bulilima-Mangwe District, Chief Superintendent Macdonald Samuriwo said investigations were still on-going and no arrests had been made by yesterday.