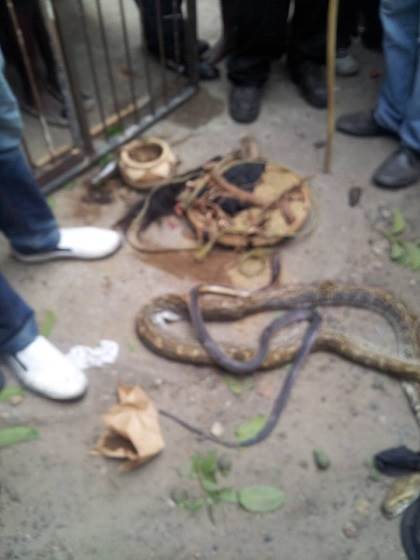 The second wife of a Murehwa businessman has claimed that she gave birth after a full pregnancy but the baby vanished.

Winnett Guvheya (46), suspects witches snatched her newborn. When labour pains hit during the night, her husband, Exaverio Guvheya (64) raced to inform a local health professional. But when they returned his wife had already given birth and the baby was gone. A blood splattered bed was all that was left.

“I got pregnant and registered at the local clinic and I would go for all the usual check ups. I also went to the hospitals and doctors would tell me that my baby was doing very well.”

“On 23 April I had labour pains during the middle of the night and my husband went to inform a village midwife.

When he was gone the pains got worse and I could feel that the baby was coming out. The baby cried twice.

“I was too exhausted and was lying there waiting for my husband to come back with the midwife for them to sort out the baby.”

She claimed that as the baby came out she probably fainted and was hearing voices.

“I heard a voice urging me to push the baby out as it was time up. The voice also told me that you have given birth and then I heard the cries. When my husband came back I opened my eyes and told him to hold the baby. I was told that there was no baby except blood and water.”

The umbilical cord was also gone. This is not the first time the businessman’s wife’s births have been a mystery.

The last time she claimed she gave birth to a bottle filled with blood.

Other villagers suspect that the couple use their newborn babies to enhance their businesses. Some believe the woman was lying to her husband. But she denied this saying she had evidence to prove she was indeed pregnant.

The husband said he was shocked by the disappearance of the baby.

“She was alone in the house. This is frightening and it is the work of witches. It looks like the witches forced out the baby and ate it.”

He said his wife was pregnant and denied that they were killing their newborns.

“My wife works in the shop and everybody knows that she was pregnant. My first wife has her own shop and my second also has her own. This is the work of witches.