The Latest on the investigation into a shooting that left three people dead and 12 wounded, two gravely, at a restaurant operating out of a converted home. (all times local):

Los Angeles police have arrested two suspects in the shooting that left three people dead and 12 wounded at a restaurant operating out of a converted home.

Police said 33-year-old Mowayne McKay and 25-year-old Diego Reid, both of whom are Jamaican nationals, were taken into custody early Sunday. They are expected to be booked on murder charges. 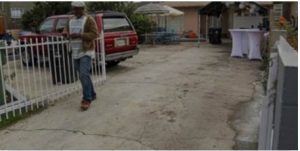 Investigators believe a dispute between a man and at least two other man led to the shooting early Saturday at a birthday celebration attended by around 50 people in LA’s Jamaican community.

Police said one man was shot, then several other shots were fired indiscriminately in the crowd. They said other party-goers may have returned fire in the direction of the suspects.

One of the dead was the man who got into an argument with the suspects. Of the injured, police said one man remains hospitalized in extremely critical condition.

Los Angeles police are searching for at least two suspects in a shooting that left three people dead and 12 wounded at a restaurant operating out of a converted home.

Officer Jenny Houser said Sunday that detectives are still trying to determine a motive for the gunfire that erupted during a birthday celebration attended by more than 100 people.

Police questioned two possible suspects shortly after the incident, but officials said later no one was in custody. Investigators have not released suspect descriptions.

Three people died at the scene. Houser says two victims were in critical condition late Saturday. Two of the wounded were released and the others had wounds that were not considered life-threatening