YOUNG MAN RAPED BY MEN AND GIVEN HIV

Twenty-one year-old Jason Powell* said he contracted Human Immunodeficiency Virus (HIV) after being molested by two men who promised to help him. Since then, his already troubled life became even more turbulent.

Powell, who was abandoned at a boy’s home at three years old, said he has struggled with depression, discrimination and abuse for as long as he can remember. However, he hopes his life will turn around one day.

“Sometimes I try not to think about my past, but it’s very hard when you don’t have anyone around you to encourage you. I don’t want to continue living like this for the rest of my life,” Powell said.

With nowhere to turn, Powell took the streets, sleeping at bus stops and begging for survival. But instead of receiving help, he got abuse and discrimination instead.

“You have people who would say they want to help me, but they want sexual favours in return. When I tell them I’m not up for it, they would turn on me and call people to beat me,” Powell shared.

Eventually, a state agent assisted in getting Powell reinstituted into a state home, under conditions that he would help out around the home. However, his peace of mind was short lived. 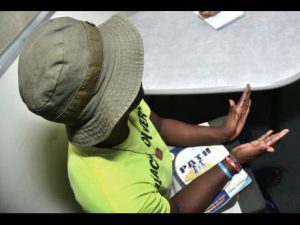 He explained that a woman offered to take him into her home for the summer, and he gladly complied. While at the house, the women went overseas and left him alone in the house. Soon after, two men turned up explaining that the came to work on the house, but instead, they molested him.

“One of the guys asked me for some water to drink. When I returned with the water, mi realise that him start touch me in placed that wasn’t right, and he continued touching me until the other guy came and told me to relax. Basically, that’s how the two of them sexually molested me,” Powell shared.

When the woman returned, Powell said he explained what transpired but she called him a liar, and sent him back to the boy’s home. The matron at the home later facilitated an HIV test, which came back positive.

When the other boys at the home got wind of Powell’s status, he was constantly tormented.

“They found out and started using it against me, calling me a gay, and say that I’m a homosexual, and me allow man fi have sex with me, and that’s how me get AIDS,” Powell explained.

Traumatised and confused, Powell ran away once more, and ended up on the streets in Kingston. Eventually, he started receiving treatment at Jamaica Aids Support For Life and was allowed to reside in a state owned shelter. But the discrimination and abuse never wavered.

“Some people at the shelter keep saying dem no want any homosexuals on the compound. They are saying I am gay and I can go out there to do ‘things’ and get money, so I should leave,” Powell lamented.

Now, the young man says he is at his wits end and is desperately pleading for some assistance to turn around. He explained that he was exposed to catering and customer service training at the boy’s home and he would love a job in a related field.

“I know I have potential and can do anything that I am tasked with,” Powell said.

6 thoughts on “YOUNG MAN RAPED BY MEN AND GIVEN HIV”