I AM A VIRGIN WIFE………..MY HUSBAND CANNOT PERFORM 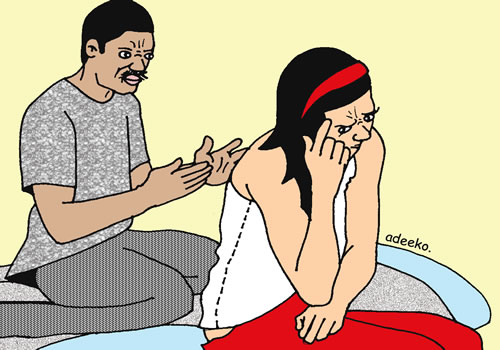 Dear Taiwo,
I don’t know if you and some of your readers can believe me, but I swear, I am telling the truth and I need your help and that of your readers urgently before I run mad.

I always thought I had a confidant and best friend in my mother, but I received the shock of my life when she, of all people, refused to believe me. Her attitude is so painful because I sacrificed my happiness and mortgaged the only true love I have so that she can have peace.

I am the only child of my mother. I come from a polygamous set up, with several half brothers and sisters and numerous step-mothers. Though my mother is not the first wife, it is obvious to everyone close to us that she is my father’s favourite. She makes his meals and attends to all his needs, even when he has guests, both foreign and local; it is my mother’s responsibility to make sure that they are comfortable.

Although outsiders would think this position of my mother is an enviable one, but I can assure you that none of my step-mothers envy my mother at all. Though polygamous, our home remains a peaceful one. I come from one of the Hausa/ Yoruba communities and my father is a very rich and influential Nigerian.

My reason for writing you is, however, different from my background, but I must mention it because it is also the reason I am in this mess.

My mother waited on the Lord for the blessing of a child for 12 years after she married my father. Before the Lord answered her, she had prayed and done a lot of things. According to her, throughout her waiting period, my father and her mates in the house all supported her.

She confirmed to me that one of my father’s friends who just came into the country then introduced them to a cleric, who prayed for her and my father promised the cleric then that if the Lord would give my mother a child through his prayer intervention and if the child is a girl, she would marry his son.

I learnt that the cleric, then, told them that my mother would give birth to a girl and, of course, the baby girl will be her only child. They both still went on to agree that I will marry the cleric’s son.

As God would have it, I came and remained my mother’s only child till date. Without mincing words, I remained everyone’s pet, coupled with the fact that I am a carbon copy of my paternal grandmother. Everyone called me Iya wa, meaning our mother.

My mother, however did not spare the rod with me and I sincerely thank her for that. I grew up like every other girl with dreams of her own, without any inclination of the fate which awaited me. When it was time for me to go to the university at the age of 19, my mother told me about the circumstances which surrounded my birth and the promise my parents made to the cleric. Of course, I know the old cleric, who has become almost a part of our family after the miracle of my birth.

I didn’t meet any of his children, although I learnt he also had many wives but not much children, they all live and studied abroad. He is a rich man, and can afford to send his children abroad because of his rich clients and the fact that he is also not a Nigerian.
Sincerely, I didn’t believe my mother could be serious about this. I didn’t bother to ask my father because I believed it could not be a serious promise at this day and age.

I remained a virgin, because it is a norm in our house for us girls to remain so till marriage. In my 300 Level, I met and started dating Hameed. I brought him home like I was expected to, my mother spoke with me again about my supposed betrothal. Of course, I did not own up about my relationship with him, I told her that he was only a friend.
After my youth service, I travelled to the US for my Masters Degree. I was in California while Hameed was in Texas. If I knew the fate which awaited me, I would have forced him to have sex with me. I loved him with my whole heart, a gentleman to the core, who believed in our culture and very religious too.

Throughout the time we were together, he never for once attempted to have sex with me. We decided to save that till our wedding night as our culture and religion dictates. I worked for almost a year after my degree and my parents asked me to come home. When I did, they both told me it was time for marriage.

I told them about Hameed, but they disagreed with me and told me that I had been betrothed to Basit even before I was born and they were not ready to go back on their words.

It was a painful period for Hameed and I. Eventually, I gave in to my parents wish, especially because of my mother. She has no other child; I could see the pain the whole situation was causing her. My father also loved me and he actually confessed that if he knew I was going to be a girl, he wouldn’t have made the promise, because he loved me and would love me to be happy. In fact, my parents had to speak with Hameed and they prayed for him.

I met Basit and liked him, although I cannot love another like I loved Hameed. We eventually got married second Saturday in November last year. We travelled to Spain for our honeymoon. On our wedding night, apprehension, the trip and other issues didn’t even allow us think of sex for the first two days of our marriage, because I actually fell ill as a result of what I ate while on board the aircraft.

Afterwards, I expected my husband to make a move and he didn’t. Well, I really do not love him, so I wasn’t too fussy about it. But, of course, when days built into weeks and weeks into a month, I had to ask him if he didn’t like me.

My husband confessed to me that he cannot even get his dick up, talk less of having sex with me. I was shocked, dismayed and disappointed all at the same time. He pleaded with me to give him time. He wasn’t born that way and he hasn’t told anybody.
We came back home after our honeymoon for few weeks and went back to the US where Basit is based. When I couldn’t stand it anymore and my mother keeps asking questions about my body, baby and all, I had to tell her everything on phone that I have been married since November last year and still remained a virgin because of my husband’s inability to have sex, but my mother didn’t believe me. If my mother does not believe me, then who will?

My husband has also pleaded with me that we keep this between us till he is able to find a solution. Although, I don’t know when that will be. I returned home two weeks ago to see my sick father. I found a copy of your newspaper close to his bed and read your column, that was why I phoned you, please, what can I do?

0 thoughts on “I AM A VIRGIN WIFE………..MY HUSBAND CANNOT PERFORM”