A Brooklyn woman who had just taken a shower was dragged from her apartment by about 12 cops who then stood by for more than two minutes while she was naked in the hallway, according to video that emerged Friday.

Denise Stewart was in her Brownsville apartment on July 13 when police — responding to a domestic disturbance call at the building — pounded on her door at 11:45 p.m. and demanded entry.
Stewart, 48, cracked the door wearing only a towel wrapped around her body and underpants — and was yanked into the hallway by cops over the screams of her family and neighbors.
The video shows a chaotic scene as a dozen or so male officers burst into Stewart’s apartment, while several others struggle to subdue and cuff the nearly naked woman in the hallway outside.
Stewart’s towel got lost in the scuffle, leaving the grandmother dressed only in underpants.
“Oxygen, get my oxygen,” the mother of four can be heard saying to the cops, as they propped her bare body against the wall.
A cop shouts, “OK, OK,” and darts out of the screen.
Neighbors videotaping from the stairwell started shouting as Stewart, who has severe asthma, fainted and fell to the floor.
“Yo, her mother got asthma …y’all wicked, y’all f—— wicked,” shouted one woman.
“Her asthma! Her asthma! Her asthma,” screamed another woman.
For approximately two minutes and 20 seconds, Stewart was bare-breasted in the hallway as additional police officers tramped up the stairs and through the hallway, glancing at her as they passed by.
When cops hauled Stewart’s two sons and two daughters out of the apartment and cuffed them, a female cop finally draped a white towel over Stewart’s exposed torso.
Reached at her home Friday, Stewart told the Daily News she was traumatized. 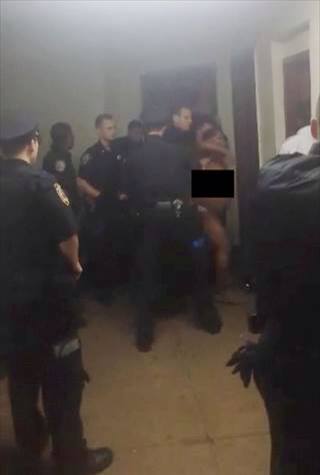 “It’s disgusting and embarrassing. I’ve been married 16 years. It took my husband 10 years to see my nakedness,” she said.
“I didn’t do nothing wrong,” she said, crying as she recounted the ordeal.
Denise Stewart stood bare-breasted in the hallway for more than two minutes. Denise Stewart stood bare-breasted in the hallway for more than two minutes.
Previous Next
NAKED – Brooklyn cops responding to a 911 call for a domestic disturbance went to the wrong apartment, pounded on a woman’s door and then dragged the nearly naked woman into the hallway and handcuffed her. “You have the wrong apartment,” she told cops, as she tried to close the door. The outrageous behavior, captured in a stunning video, has led to a lawsuit. The woman was in the shower when cops arrived. She was wrapped in a towel and wearing underwear when she cracked the door open. Cops pulled her out and left her exposed for several minutes before a female cop covered her up. A witness can be heard on the video screaming, “What are ya’ll doing? That’s a female!” Happened about 11:45 p.m. on July 13 in Brownsville. The actual 911 call came from an apartment upstairs.
The NYPD said they’d gotten a 911 call to the Kings Highway address but didn’t have an apartment number.
They heard shouts coming from Stewart’s apartment. When they knocked, she told them they had the wrong place and tried to shut the door, police said.
Stewart’s 12-year-old daughter had “visible injuries” to her face, cops said. She told officers her mother and older sister beat her with a belt, police said.
Family members tried to prevent them from arresting Stewart, who bit an officer’s finger during the struggle, police said.
Stewart’s lawyer, Amy Rameau, said she was told by a Legal Aid attorney also assigned to the case that the 911 call came from a different apartment on an upper floor — and cops went to Stewart’s door by mistake.
Cops removed the 12-year-old from the apartment and say she refused to get into the police car and kicked the door. A police spokesman said the child kicked out one of the police van’s windows, with the broken glass cutting the chin of one of the cops. The cops were treated at local hospitals and released.
Denise Stewart was charged with assaulting a police officer, and — along with her oldest daughter, Diamond Stewart, 20, — resisting arrest, acting in a manner injurious to a child and criminal possession of a weapon.
She feels completely mortified. This is about human dignity.
Stewart’s son Kirkland Stewart, 24, was charged with resisting arrest. The 12-year-old was charged with assaulting a police officer, criminal mischief and criminal possession of a weapon.
Diamond Stewart’s 4-year-old son was also pepper sprayed, the family said.
“They manhandled (Stewart) and behaved in a deplorable manner,” Rameau said. “She feels completely mortified. This is about human dignity.”
The city’s Administration for Children’s Services was called to investigate but didn’t find any evidence of neglect, said Rameau.
“There were no injuries to the child as alleged in the complaint,” the lawyer said.
A police spokesman said the incident is under investigation by Internal Affairs.
jmarzulli@nydailynews.com