A 17-year-old boy says he has not slept in a week because of the painful wounds he received after he was attacked at a girls’ home.

Kemar Williams of a Grant’s Pen address claims he was burnt with acid at a girls’ home in the area when he went to collect his earphones from one of his friends. He remains a patient at a Corporate Area hospital. 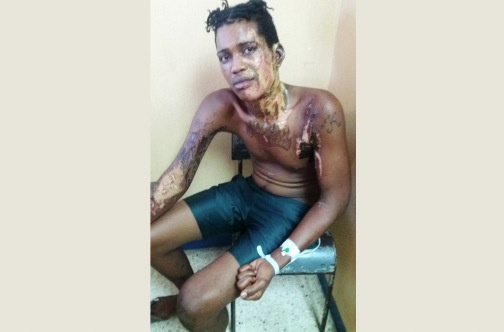 He told the Jamaica Observer that about nine o’clock last Sunday night he went to the home, where his sister once lived, when the women who supervise the girls attacked him.

“When me go over deh dem (the women) come out an dem start fling bare stone an say weh me a do yah, an me say ‘a mi earphone me come fah’. One a dem did have a ‘las’ (machete) in dem hand, one a dem have di something weh dem use an burn me up. Me neva see weh she have in har hand an she throw it pan me an it burn me up,” the 17-year-old recounted.

When asked why he went to the home at that hour, Williams said that one of the girls agreed to place music on a memory card for him, which he would collect along with his earphones at a later date. Out of boredom, the boy said he went to collect the items despite words of warning against the late night visit from the friend.

It was at that point he said he was attacked by the two house mothers.

Williams received burns to his face, back, neck, torso, arms and some areas of his abdomen.

He noted that he was surprised at the response he got from the women, claiming that they knew him as he would visit frequently.

“Me nuh know wah mek she choose fi bun me up.”

When the Sunday Observer visited the home yesterday to ascertain more details, the property was padlocked and we were told that the occupants were relocated last week.

“Nobody is over there now. An incident happened last week over there and they moved them out,” a neighbour told the news team.