3 YO WHO WAS FOUND DEAD

Leashay Thomas, remembered by her teacher as a very bright little child.

MONTEGO BAY, St James — Some residents of Flower Hill in this western parish openly expressed their anger yesterday when they learnt that a three-year-old girl from the community was found dead and her father was being sought by the police.

Police said that the body of the little girl, Leashay Thomas, was found early in the morning on the popular Dump Up Beach, hours after receiving a distress call from a relative of the child.

According to the police, on Monday night, a man, purporting to be the father of the child, called a family member to say that he was going to commit suicide as he had killed Leashay and threw her body in the sea at the popular Montego Bay beach.

A police spokesman said shortly after officers were dispatched to the beach to investigate the report but returned to their base after coming up ‘empty-handed’ after an extensive search of the shoreline. However, upon their return to the area yesterday morning they spotted the body of a child which was subsequently fished from the sea. It was later identified as that of Leashay. They were yesterday awaiting the results of a post mortem to determine the cause of the little girl’s death. 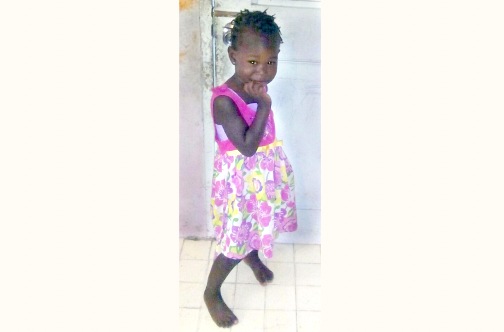 Police last night appealed for the public’s assistance in finding the whereabouts of the child’s father, Roosevelt Thomas, alias ‘Timmy’, whom they said could assist them with the investigations. Police alleged that Thomas, a resident of Flanker in the parish, took Leashay from her home in Flower Hill on Monday evening.
They said the death of the little girl was being treated as an infanticide, until proven otherwise.

Meanwhile, there was a sombre mood yesterday at the Salt Spring Primary and Infant School where Leashay was a student. She was described by her teacher, Zena Bailey, as a jovial individual.

“She is always playing and smiling. She is full of life and to see her gone at this stage of her life is really sad. It is really sad,” the distraught teacher said.

“I am going to miss her and I pray that the family of Leashay will get through this. We need to support them. Leashay was very bright little child. [She was] bubbly, playful [and] a little mischievous at times, but that’s how children are. I love her and it is really sad.”