4 MORE CHARGED WITH FLIPPA WE NEED THE NAMES OOO 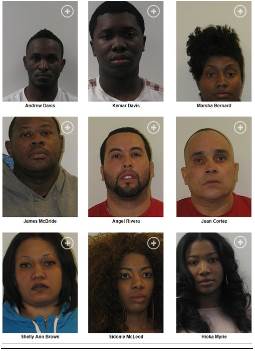 TRENTON – Acting Attorney General John J. Hoffman announced that a Jamaican recording artist and his brother were charged as leaders and 13 others were charged as co-conspirators in a first-degree indictment returned today against an international drug ring that used the U.S. Mail and other parcel delivery services to ship multiple kilograms of cocaine from California into New Jersey.
The alleged ringleader, Andrew K. Davis, 35, of Kingston, Jamaica (formerly of Swedesboro, N.J.), and his brother, Kemar Davis, 23, of Hollywood, Calif. (formerly of Margate, Fla.), are each charged in a state grand jury indictment with leading a narcotics trafficking network, a first-degree crime that carries a sentence of 25 years to life in state prison. They face additional first-degree counts of conspiracy, distribution of cocaine and money laundering, each carrying a sentence of 10 to 20 years in state prison. Andrew Davis is a well-known Jamaican dancehall DJ who records under the name “Flippa Mafia.” Kemar Davis also goes by the name “Kemar Mafia.”

The other 13 defendants are charged with first-degree conspiracy to distribute cocaine and launder money. Twelve of them also are charged with first-degree distribution of cocaine. The indictment was obtained by the Division of Criminal Justice Gangs & Organized Crime Bureau. The charges are the result of “Operation Next Day Air,” a multi-agency investigation led by the New Jersey State Police, the U.S. Drug Enforcement Administration (DEA) and the Division of Criminal Justice.

The investigation began in March 2011 and targeted the ring’s shipment of large quantities of cocaine through parcel delivery services to New Jersey for bulk distribution to other narcotics suppliers and dealers. Andrew Davis allegedly led the organization’s drug trafficking activities from various locations in Jamaica, California and New Jersey, with the help of his brother Kemar. In the course of the investigation, detectives recovered more than 26 kilograms of cocaine, worth approximately $780,000, two handguns, and more than $600,000 in cash.

“We put a stop shipment on this international cocaine ring through this long-term investigation involving the cooperative work of all levels of law enforcement,” said New Jersey Acting Attorney General John J. Hoffman. “By interdicting these major suppliers, we are substantially reducing the quantity of narcotics reaching New Jersey’s streets and protecting our residents from the violence that invariably accompanies drug dealing.”

“When detectives intercepted eight kilos of cocaine at the start of this investigation, they didn’t jump to make arrests and tout a major drug seizure. Instead, they stepped back and built a far-reaching case that took down all of the key players in this drug syndicate,” said Director Elie Honig of the Division of Criminal Justice. “This indictment is a testament to the outstanding work of all of the agencies that collaborated in this case.”

“An international criminal conspiracy of this magnitude required an equally large law enforcement response,” said Colonel Rick Fuentes, Superintendent of the New Jersey State Police. “A cooperative effort involving multiple agencies was instrumental in taking down this organization, and I would like to commend all of the dedicated investigators for their hard work.”

“The dismantlement of this international drug trafficking organization is a great success for law enforcement, and our communities are safer as a result of this investigation,” said Carl J. Kotowski, Special Agent in Charge of the Drug Enforcement Administration, New Jersey Division. “The DEA and our law enforcement partners will continue to pursue drug violators wherever the investigation leads us.”

In December 2012, both Andrew and Kemar Davis traveled to Jamaica. Andrew remained in Jamaica, but he allegedly continued to control the drug ring’s activities by directing Kemar and others. Kemar returned to the U.S. and oversaw the shipment of kilogram quantities of cocaine from California to New Jersey. Bernard and other defendants allegedly received the drugs and distributed them to drug traffickers in New Jersey, under the direction of the Davis brothers. Most of the purchasers bought kilogram quantities of cocaine from the Davis organization. Bernard allegedly handled the drug proceeds, sending them to Andrew Davis in Jamaica and Kemar Davis in California.

Over the course of the investigation, detectives documented meetings allegedly involving the transfer of multiple kilograms of cocaine among Bernard and the following additional defendants:
◾Shellyann A. Brown, 34, of Trenton,
◾Sidonie S. McLeod, 28, of Cherry Hill,
◾James C. McBride, 41, of Mount Laurel,
◾Angel R. Rivera, 33, of Vineland, and
◾Juan M. Cortez 41, of Vineland.

On March 11, 2013, Rivera and Cortez were arrested after investigators observed Bernard deliver a package containing approximately one kilogram of cocaine to them in Cherry Hill. They allegedly hid the cocaine in a secret compartment in Rivera’s vehicle. A stolen handgun was later recovered from Rivera’s residence.

On March 15, 2013 State Police detectives and DEA agents coordinated additional arrests in Operation Next Day Air as a significant shipment of cocaine arrived from California. The execution of multiple search and arrest warrants in Cherry Hill and Mt. Laurel resulted in the arrests of Bernard, Brown, McLeod, and McBride. McLeod and McBride were arrested in Cherry Hill after McLeod allegedly delivered three kilograms of cocaine to McBride, which were seized by the State Police. That same day, DEA agents arrested Kemar Davis in Los Angeles, California. Another defendant, Hioka N. Myrie, 33, of Philadelphia, surrendered to detectives on May 14, 2013. Andrew Davis was arrested in Los Angeles on Sept. 16, 2013 by members of the U.S. Marshals Fugitive Task Force.

One identified fugitive and five unidentified defendants also are charged in the indictment. Because those defendants are being sought by law enforcement, no information is being released on them.