8 GAYS TAKEN IN FOR ROBBERY 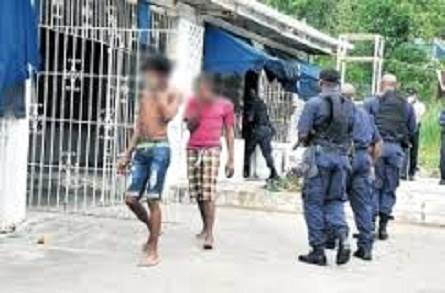 8 homosexuals in custody for robbery

Five others named as ‘persons-of-interest’ after New Kingston raid

KINGSTON, Jamaica — Eight homosexual men believed to be involved in a series of robberies in the New Kingston area were taken into custody at the Half Way Tree Police Station Sunday.

The lawmen say they accosted and searched the men who reside in a close by gully and recovered several items of stolen property.

The police also listed five other men believed to be involved in the spate of robberies as ‘Persons-of-Interest’.

The men, only known by their aliases, are ‘Marlene Malaboo-Forte’, ‘Michelle’, ‘Pebbles’, ‘Goodas’ and ‘Bat Man’.

These men or anyone knowing their whereabouts are being asked to contact the New Kingston Police Post at 926-3508, Police 119 emergency number or the nearest police station.

0 thoughts on “8 GAYS TAKEN IN FOR ROBBERY”