84 YO SEH PROSTITUTE A DAGGA UNDER HIM WINDOW 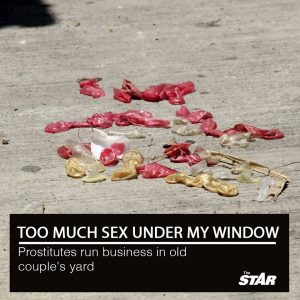 in Henry of Falmouth, Trelawny, it is causing him much distress and sleepless nights.

Prostitutes and their clients, who blend business and pleasure along Falmouth Street, also known as ‘Back Road’, have converted Henry’s yard into their ‘romping shop’. They use a secluded spot under his bedroom window as a sinful haven for their ‘moaning’ and ‘groaning.’

“They have chosen right under my window to do what they are doing,” complained Henry, who is clearly not amused by the antics of the nightly invaders. “… They behave in a most disgraceful manner … the foul language and the threats of fights. Friday to Sunday are the worst times, especially between the hours of 10 p.m. and 5 a.m.”

Henry told THE WESTERN STAR that his 82-year-old wife has to wake up daily to the sight of condoms strewn all over the yard, which has been her much- cherished home since 1976.

“It is a cruel time for us,” bemoaned Henry, who is a devoted Christian and still sings on the choir at the Falmouth Anglican Church.

With his appeal to to various entities, including the police, the municipal corporation, the public health department and the National Solid Waste Management Authority yielding no tangible results, Henry is now at his wits’ end.

“Believe me, I sometime harbour thoughts of taking the law into my own hands, but at my age, I cannot take prison life,” he said.

As if the sleepless night are not enough misery, Henry also has to live with the stench of the urine deposited in his yard by his unwelcome guests.

“When the sun beats down on the urine and the condoms, the stench is unbearable,” said Henry.

“I cannot even open my window to enjoy the wind coming from the north.”

The Trelawny police have acknowledged getting numerous complaints from Henry about the unholy situation in his yard and have promised to take measures to arrest the situation.