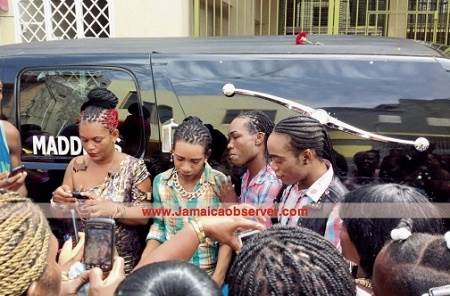 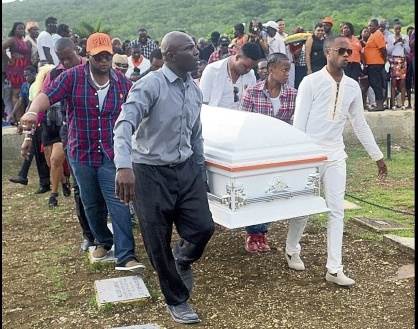 MONTEGO BAY, St James — Despite the noticeable absence of the ruling People’s National Party (PNP) bigwigs from the two services of thanksgiving yesterday for the life of Kenley ‘Bebe’ Stevens, a former vice-chairman of the West Central St James constituency, hundreds of people from across the parish turned out to bid the prominent political activist their final farewell.
Apart from member of Parliament for the area Sharon Ffolkes-Abrahams, who gave a short tribute before saying that she was leaving for another funeral, and councillor for the Granville Division Michael Troupe — both of whom attended the second service held at the Granville Deliverance Centre — there was a marked absence of members from the leadership of Stevens’ party.
At Granville, too, Minister of Labour and Social Security Derrick Kellier, who was listed amongst those to give tributes, was a no-show.
It was not clear if the staging of the party’s National Executive Council meeting in Kingston yesterday had kept members of the party’s hierarchy away from the funeral for the man, whom the PNP said had contributed much to its organisation.
The 30-year-old Stevens, who a senior police officer alleged was the mastermind behind the lottery scam and was said to have had close ties with the gay community, was killed at his gate in the upscale Coral Gardens community in this parish last month. The killing happened only hours after he attended a meeting of the party’s Regional Executive Council in Montego Bay.
The absence of the politicians yesterday, however, did not prevent the hundreds in attendance from demonstrating their love and appreciation for Stevens during the services of thanksgiving, which took on a carnival-like atmosphere.
At the first service held at the Holy Trinity Zion Church on Barnett Street in Montego Bay, several men — some dressed in colourful skimpy outfits and sporting well-groomed hairstyles, wept openly as they reflected on Stevens’ life.
Pastor at the church, Juven Guthrie noted that Stevens “had been coming here for a while” and was very determined to serve the Lord.
“It’s just a pity that he was not baptised,” he told the mourners in the packed church.
Church member Kevin Samms described Stevens as one the kindest men he has ever known.
“He was never afraid to give up himself and anything he has to the young, the old… when he enters the church he always did so with his Bible in his hand. He was never afraid to praise God,” Samms told the mourners.
Bishop Leroy Shaw, in his tribute, told the mourners that, “despite what they say about Stevens, that did not stop him from coming to church and worshipping God.”
“And all when I lick out against Bebe, that still did not stop him from coming to church. He is always among the first to give an offering, and he always gave a good offering,” said Shaw.
He told the mourners that his church is willing to accept and baptise people of different sexual orientations.
“Mi glad fi baptise the sodomites dem, mi glad fi baptise the homosexuals them, mi glad fi baptise the fornicators them…,” declared Bishop Shaw.
Following the two-hour-long service at the Holy Trinity Zion Church, the white-and-orange casket bearing the remains of Stevens was taken to a black hearse and transported to the Granville Deliverance Centre in his native Granville community.
There, hundreds of people lined the streets in multi-coloured outfits, while strains of gospel music permeated the air.
Inside the beautifully decorated church, mourners jostled to view Stevens’ body, dressed in a white jacket and matching shirt and pants.
There, Troupe, in his tribute, lauded Stevens for his work in the Granville community.
Describing the deceased comrade as a “people person”, Troupe said Stevens had touched the lives of many in the Granville Division.
“I can tell you that Comrade Stevens walked this path in Granville and there will be no other person that can fill the footsteps of Comrade Kenley Stevens. No other person in the Granville Division,” he stressed.
He added that Stevens never forgot the old and the young in the community.
Troupe, who is also the deputy mayor of Montego Bay, said the executive of the Granville Division has taken a decision to make one scholarship available as of September — valued at $35,000 — to a student of the Granville All-Age School in memory of Stevens.
“And there will be $5,000 for each basic school in Granville starting in September,” said Troupe, adding that “because he was a lover of children and senior citizens $50,000 will be made available every year to take care of senior citizens”.
Meanwhile, Ffolkes-Abrahams, in her tribute, said Stevens will be sadly missed by the Granville community. She said she was saddened by the death of the comrade who was very good at organising events.
“The crime and violence, we cannot tolerate it. Too many people are dying by the gun,” she stressed.