When Javaughn Taylor heard that his former Annotto Bay High School teacher was ill and was living on the street in Portland his first thought was that he had to find her, and for over three months he searched diligently.

The 20-year-old aspiring pastor, who hails from Annotto Bay in St Mary, said there were times when he felt like giving up, but persevered as he could not be at peace with himself knowing that his teacher, Celia Parks, was alone on the streets.

Taylor’s search, which started sometime in January, came to an end on May 3, when he, along with Parks’ older brother, Ruddy, found her inside an abandoned building in Buff Bay. This, however, was after making initial contact April 30.

Miss Parks, when found, had locked herself inside the building and had refused to come out. The police was called to help remove her and she was subsequently taken to the Annotto Bay Hospital where she has since been admitted and is receiving treatment.

Taylor, who is not an avid social media user, documented the search on Facebook.
Last Monday the Jamaica Observer visited him at Castleton Primary and Junior High School, where he teaches drumming, and sat for an interview.

“I knew Miss Parks back in 2008 when she taught me integrated science in school. She was a God-fearing person; there wasn’t one day that Miss would not start her lesson without telling us bout Jesus and what he can do for us. She was very God-fearing and we admired that about her and that was one of the things that put me out of my comfort zone to go out and seek for her,” he said.

According to him: “It all happened when I went and looked for a former classmate. Miss Parks taught both of us and we were there talking and she said if I hadn’t heard that Miss had gone literally mad, and I said, ‘No, that can’t be! The teacher that Miss Parks was to us, we really need to go out there and find her and find some assistance for her’.”

Taylor said his classmate agreed, but never followed through, so he went in search of Miss Parks on his own.

“I go to Portland every weekend just to find Miss Parks. One of the times I got fed up and said it makes no sense I’m going out there and not finding her, but I couldn’t keep my heel knowing that Miss Parks is out there and is insane,” he said.

Taylor said he visited all the town squares in Portland and searched relentlessly for his former teacher, and when he did not find her, took a two-week break.

When he resumed, the young man said he left his number with different people and asked them to contact him whenever Miss Parks showed up and that was how he found her. He reported that he was at his friend’s house talking about Miss Parks when he received a call that she was in Buff Bay and he did not hesitate; he rushed home, got dressed and left.

He was accompanied by his friend Oshane Weatherman and they left for Portland with only $650.

“I said how is this going to work, as I really wanted to get her something to eat and while I was walking I was talking to God,” he said.

Taylor said when he got to Annotto Bay square he was just in time to see one of his church elders who offered him a ride to Buff Bay. When he got to his destination he saw Miss Parks sitting by the side of the road and was surprised that she recognised him instantly.

“As I was about to embrace her and say ‘How are you doing?’, before it could come out my mouth, she braced back and said in proper English – as she speaks well- ‘Javaughn Taylor what are you doing here?’

“My heart was filled with so much compassion for her and when she called me by my full name I was astonished and I embraced her. She was smelly, but the way I was feeling at the time I just embraced her. I knew that she was smelly and all but it wasn’t on my mind at that time and I hugged her real right,” the young man said with a smile.

“I told her that I had been looking for her and was here now to help and asked her want she wanted to eat and her reply was, ‘What do you have? I don’t know what is in your pocket’,” he further recalled.

Taylor said he ran across to a nearby shop and bought two buns, a bottle of soda and a bottle of water and handed it to Miss Parks, who said, “Thank you. I will give it to the God I serve first and once he is finished I’ll eat after.”

Taylor said his heart was filled with joy and he sat next to her and started a conversation in an attempt to test her memory. He asked her about a particular incident that had occurred in grade 8 and she referred to the exact class in which the incident had occurred.

“When I heard what she said, I said ‘There is hope for Miss Parks to come back’, and we started laughing. I was laughing, she was laughing and my friend was laughing and a bus was passing and somebody stuck out their head and said ‘Oh gosh three a dem one time’,” he said, unable to contain his humour.

He later posted a picture he took with her on Facebook in hopes that some of her former students and family would reach out and help. When he checked sometime later, he said, he was overwhelmed to the point of tears by the number of messages and notifications that he had received.

He said he responded to several of the messages and told people that he did not do it of himself but because of the grace of God, and from there he realised that he could not let the matter end there as “the world was looking on me to do something about Miss Parks”.

Shortly after, Taylor said someone contacted him and told him that she knew the teacher and had got in touch with her brother and together they again went in search of Miss Parks and took her to the hospital.

“I visit her daily, but she had been living on the streets for eight years, so the doctor tells me that it’s going to take a while for her to come back to her normal self but her physical is ok,” he told the Jamaica Observer.

Taylor said he wants those who can assist to reach out and help and also made an appeal for Education Minister Ruel Reid to step in, as Miss Parks had not resigned from her job. He said she went on maternity leave in 2008 and never returned.

Parks’s older brother, Ruddy who had helped to find her, said she was living in St Mary with the family but moved to Portland and some time after his brother told her that she was not doing so well. He said he tried to reach out to his seven other siblings to come together and to find her, but they never did and so he was happy when Taylor intervened.

“When mi find har she was in such a state I have to cry, but I think something definitely wrong with her,” he said.

“Everytime me go she cus me and she cus Javaughn and she not like that with other people so I think the spirit that she have don’t like me or Jevaughn,” said Ruddy.

He also noted that his sister did not recognise him but said he does not hold anything against her, as he knows that she is not well. He said that he wants to build a room for her close to him so that he can care for her until she recovers. 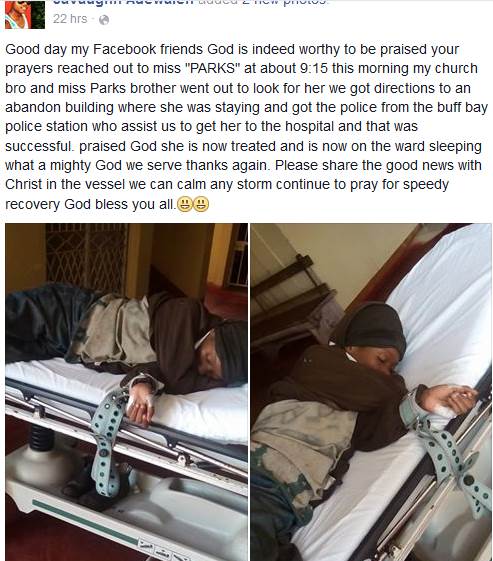 “Javaughn is a good guy, just like me son. Him encourage me, him push me, him do everything and when wi drop a Buff Bay him say ‘Ruddy we nah stop walk and search until we find har’. Me respect him to the max. Nuh sista nuh come do the work that he his doing.

“Up ‘til now mi nuh know what the rest of the family is doing, but in myself mi would like to take her,” he added.

When asked if he knew what had led to his sister’s demise, Ruddy said he heard that her husband had an affair and he believed that that’s what pushed her over the edge.

Further to that, his younger brother, Oral, in a post on Facebook, blamed Miss Parks’s husband and officials at the school for her condition, accusing the institution of mistreating and forcing her out, and her husband of using her and taking away her children.